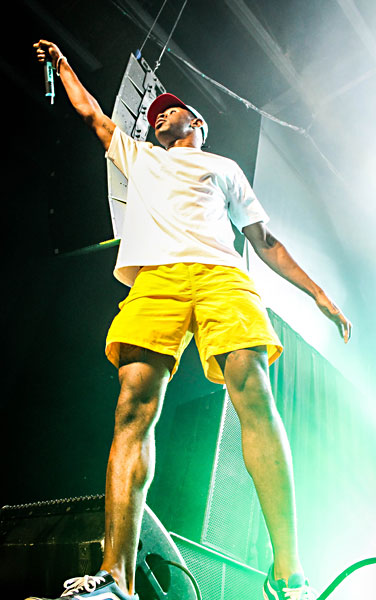 
The great news for Emo's was: no riot. Not that Tyler, the Creator's performance precluded belligerence from fans young and old. In a scant few years of notoriety, the L.A. rapper has proved a definitive test of wide-ranging audience demographics, cartoonishly wanton violence, and modern child-rearing. Not surprisingly, then, some attendees needed a babysitter and Wet Nap for the Cheetos stains. "What's up, Austin? Motherfuckers!" barked the 24-year-old MC, and once addressed, you couldn't turn away. Tyler's magnetism locks crowds into a disturbingly palpable brand of horrorcore trap. Warming up with "Bitch Suck Dick," the turnt-up mob obliged Tyler's "no fucks given" approach, fully compliant to the rapper's demands. "Every time I jump, I feel like I'm about to die. But fuck it, I like you guys," explained a foggy Tyler, who's disclosed that his condition required a doctor's visit. When not taking deep drags from an inhaler and launching open water bottles into the crowd, Tyler proved a seasoned comic of sorts. In one exchange, he made a lucky, fair-skinned fan's day, informing him, "You can suck my nut sack, nigger!" Turning toward the rest, he hole-punches the climax: "By the way, that's a white male." For neophytes, there isn't exactly a guidebook, unless your frame of reference includes agitprop punk and industrial, which he demonstrated on rousing closer "Cherry Bomb." As he says on "Deathcamp," a mantra of sorts: "I don't like to follow the rules; I hope you understand."