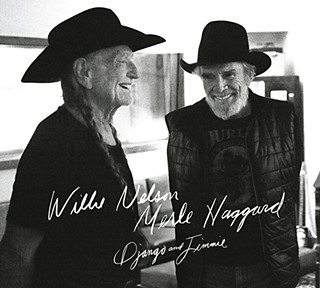 On 1983's Pancho & Lefty, Austin and Bakersfield collided head on. Atop Townes Van Zandt's epic title tale about the mercenary survivor of a pair of desperadoes, Willie Nelson and Merle Haggard topped the country charts for seven nonconsecutive weeks. It also forged a chemistry between the Texan and southern Californian revisited a fourth time here. With Django and Jimmie, the outlaws may have even topped Pancho & Lefty. The title track hardly betters its predecessor, but "Django and Jimmie" pays deft waltz-time homage to gypsy jazz guitarist Reinhardt and singing brakeman Rodgers respectively. From there, the material veers in all manner of delicious directions: a horn-driven ganja anthem, "It's All Going to Pot," co-written by Jamey Johnson and producer Buddy Cannon; Haggard's "Missing Ol' Johnny Cash," with a vocal cameo from Bobby Bare Sr.; and an authoritative reading of Bob Dylan's "Don't Think Twice, It's Alright." Across four co-writes, Nelson and Cannon continue the fruitful songwriting partnership that yielded last year's chartbusting Band of Brothers, including rocking honky-tonker "It's Only Money" and mournful "Where Dreams Come to Die." Sonically speaking, Haggard and Nelson bridge their musical signatures, the former's steel guitar and barking Telecaster meeting the latter's battered acoustic guitar, Trigger, and Mickey Raphael's idiosyncratic harp in the town square at high noon, firing up joints rather than Colt .45s. The duo's voices rasp with well-seasoned experience, not once losing their ability to divine the emotional heart of whatever lyric they address. Together, these giants deliver a master class on how country music is supposed to be done. It's also the strongest work of their three-decades-plus partnership.