Southern Rock still lives in pockets here and there, but few do it with the panache and soulfulness of Uncle Lucius. Fourth album The Light finds the local quartet as resourceful and adventurous as ever, making all sorts of music associated with the American South, not just rock, but gospel, blues, soul, and country. The whole blends into the band's trademark sound. These ain't good ol' boys out for a Saturday night boogie, but rather a group of literate, gifted players employing everything they know to make music with real value. Given the exit of bassist Hal Vorpahl, who nevertheless contributes two of the disc's 12 tunes, Jonny "Keys" Grossman steps up from behind the ivories in songwriting and adding colors to the band's sonic stance. Singer Kevin Galloway remains a brawny frontman and his songs are among the band's most compelling, with the sunny, set-opening title track and haunting dirge "Nothing to Save" putting forth striking messages in contrasting fashion. Guitarist Mike Carpenter's turn at the mic, "End of 118," feels like a new direction for the foursome, a lilting beat that recalls the Band. The Mastersons' Eleanor Whitmore lends fiddle to the sprawling "Taking in the View," which finds the devil wondering, "Where the hell have all the real souls gone?" (CD release: Thursday, June 11, Parish) 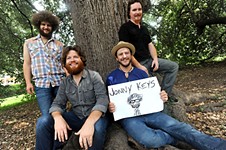