Hold My End Up Sitting at the kitchen table of his modest Lake Austin home, discussing life, Matt Vasquez suddenly bolts out through the glass front door into his yard. There's a multihued roadrunner scurrying around the driveway, as big or bigger than a chicken. He returns, beaming.

"Sometimes I come out here to find a herd of deer grazing on my lawn," he says. "You won't find this kind of stuff in Brooklyn."

Vasquez, lead singer and songwriter for indie rock favorite Delta Spirit, spent years feeling rootless. He grew up in Central Texas and attended Dripping Springs High School for a year. When his parents divorced, he moved to southern California with his father.

"I was here staying with my grandparents," he says. "I was smoking pot in middle school. My freshman year I took some acid and ended up in the hospital. So I ended up in Cali to be with my dad.

"Then my mom came out there to take care of me. I graduated from high school in California. That's how I met Kelly [Winrich], the other songwriter in the band."

It was there, in the mid-2000s, that Delta Spirit got its start. A self-released EP, I Think I've Found It, appeared in 2006, followed by full-length debut Ode to Sunshine the next year. Re-released in 2008 on roots beacon Rounder Records, the alternative folk of Ode garnered the melodic fivepiece a dedicated national following. Last year's fourth LP, Into the Wide (revisit "Texas Platters," Oct. 31, 2014), found them soaring on the early-Eighties post-punk of U2 and Echo & the Bunnymen with an equal sonic conviction. The album became the group's most commercially successful release.

To celebrate that and wind down before taking a break to think about and make "whatever's next," Delta Spirit hits the Parish on Saturday. "An Evening With Delta Spirit and Friends" takes its cue from the Band's The Last Waltz, promising special guests, deep catalog cuts, choice covers, and stripped-down versions of their most popular tunes. The musical talent at the Sixth Street show remains TBD, but the 25-plus-date tour, including stops at Lollapalooza and Michigan's Electric Forest Festival, is reported to include members of the Walkmen, Deer Tick, Dr. Dog, Clap Your Hands Say Yeah, plus singer-songwriter types like Robert Ellis and T. Hardy Morris.

"At first it was understanding just what it's supposed to be," admits Vasquez of the upcoming tour. "I don't think even we understood it. All we know is we're doing 'an evening with' shows, and we hope some of our friends show up. We've gotten a lot of people to commit to it, though – some people that we've toured with and become friends with. It won't necessarily be a band or person from the town we're playing in, but it could be.

"Austin is going to be a special one. We're flying in specially because of a Friday Night Lights reunion party that weekend, or we might not have been able to schedule anything here."

Delta Spirit's involvement with the locally produced Friday Night Lights TV series (2006-2011) includes the use of their song "Devil Knows You're Dead" in the final scene of the show's concluding episode. The band's second LP, History From Below, which contains "Devil Knows You're Dead," as well as their third eponymous release found them moving further and further away from the sunny folk-pop and alt.country that defined their sound initially. In 2012, they switched coasts and landed in Greenpoint, Brooklyn.

"Basically we were sick of southern California," explains Vasquez. "We all love Long Beach and the time we had there. There was a scene there – musicians, painters, artists, teachers. There were 20 of us and we all lived on this block in Long Beach, but we all moved away, one by one. When we lived in Brooklyn, the music scene was less catty than the scene in L.A. It was like there were a thousand scenes there in New York.

"I worked with Daytrotter and got exposed to a lot of different bands, from rap to really sweet folk. We'd do like five of those tapings in a day. It was so fun to be exposed to that much New York music and people coming through the city all in one day."

Topping the band's to-do list upon arriving in New York was writing songs for the next album and building a recording studio. Some demos were made and the studio was nearly completed when Hurricane Sandy hit in October 2012. The windowless basement was flooded ("like six feet deep"), and much of the equipment ruined.

To make the best out of a bad situation, the band relocated to Maze Studios in Atlanta. Working with producer Ben Allen (Animal Collective, CeeLo Green, Deerhunter) brought a bright energy to the material that had been composed in the darker confines of Brooklyn. After the release of Into the Wide, the band split apart – geographically. Vasquez relocated here, multi-instrumentalist Kelly Winrich and guitarist Will McLaren stayed in Brooklyn, and the rhythm section, bassist Jon Jameson and drummer Brandon Young, returned to Los Angeles.

"We still have the studio in Greenpoint," says Vasquez. "After the flood, what do you do? We rebuild. We were inspired to make things new. We recorded a lot in Brooklyn and that survived. We're planning on releasing a lot of the demos from there in a deluxe version of Into the Wide.

"You'll be able to hear the raw versions of what we came up with. Our big rock single comes across way cooler as a mellow acoustic song. The lyrics come across more. That was the idea of the tour: 'Let's just focus on the songs and the songwriting.'"

A great example of the stripped-down Delta Spirit can be found on YouTube. Recorded at NYC radio station WFUV, with just acoustic guitars, piano, and harmonica, the band takes one of Into the Wide's most devastating tracks, "Hold My End Up," to unpredictable heights. The song remains deeply personal for Vasquez.

"It's my response to the incident at Columbine and being really similar to that kind," he says. "I was this goth, their age, who loved old Metallica, White Zombie, and Pantera. Those were the bands I identified with, and I was really angry at the rest of the world. My friends were too. I stood up for myself, but there were other kids who got picked on. I just wanted to write a song for them.

"I think there are kids like that today. I'm not sure they have music like that to hold on to."

Now 31, Vasquez has settled into a vastly different life in Austin. Married, with a baby due in September, he's built a funky garage studio around the piano that graces the cover of Into the Wide. He's active producing instrumental music for commercials and tinkering with a solo album.

"It's an homage to Seventies rock & roll bands – Alice Cooper, Motörhead, Neil Young. It'll come out next spring when I'm working on the next Delta Spirit record. There were like 45 songs written for the last record. Some of those fell by the wayside and will end up on the solo record."

His eclectic taste reveals itself in a discussion about a onetime labelmate at Rounder Records, folklorist Alan Lomax. A snippet of Latin beats he created in the garage could've come from the local Brownout/Grupo Fantasma camp. Vasquez couldn't be happier about his new homestead.

"Raising a baby in New York doesn't sound that great to me," he chuckles. "I love this city. This place, more than any place on Earth, feels like home. When Delta Spirit toured, I'd get to visit my relatives here twice a year. So I've seen the city grow, and it's totally insane."

"An Evening With Delta Spirit and Friends," Saturday, June 6, at the Parish is sold out. 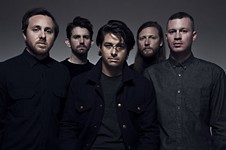