Playback: Charlie Pierce Burns It Down "I had to teach them it wasn't all right to punch their classmates in the back of the head or stand up on their desk and yell during class," laments Pierce.

Around the same time lunch bells ring inside schools, he ambles into Cisco's carrying a bottle of hot sauce that bears the name of his local band: Choctaw Wildfire. With long, dark hair that signals his Native American heritage, he looks like the Butthole Surfers' Gibby Haynes with better dental coverage. In 2012, Pierce relocated his family to Austin and has since transitioned from being an educator to a full-time musician, tickling keys in barrooms and honky-tonks nightly.

"When I was getting into teaching, I told my professors I wanted to do something to make the world a better place," he explains over coffee and tacos. "That naive thing. I'd read Howard Zinn's The People's History of the United States to my fifth graders so they'd understand the reality of America. With teaching, you're able to get some points across, but with music I'm given an even bigger platform where I can express my absolute distaste for the corporate ownership of America or my support for Bernie Sanders.

"It's all to make people think, both through the songs and conversations."

Choctaw Wildfire's second album Nowhere isn't a podium-pounding political affair, but rather an emotive introspection on death, isolation, and freedom.

Pierce's penchant for dirges shines on "Save His Soul at Last" and "The Hole I Dug for You," but it was a literal funeral song that spurred the new LP. One morning while on tour, he received a call from a woman telling him that the band's upcoming show at Angel's Icehouse in Spicewood was a memorial for her mother, a Choctaw Indian named Ruby. Pierce probed for details and composed a Willie Nelson-worthy ode called "Ruby," which he performed for the family at the wake. Impressed, the daughter commissioned a session at Arlyn Studios, where the band cut the song and nine others that make up Nowhere.

"I feel like the angels got my back," says Pierce of the serendipitous circumstances surrounding the album. "Like everything was connected by the universe. That's the way we play too. We don't rehearse, we just close our eyes and let it come out."

Sonic pop dynamos Sweet Spirit have jumped to big stages on a northwestern tour opening for local rock dignitaries Spoon. Fireball frontwoman Sabrina Ellis documented getting bounced from karaoke bars, explained playing "Tollbooth I Love You" with highway workers, and revealed Britt Daniel's backstage juice recipe. Her recap can be read on the Chronicle's Earache!, but here's an endearing segment about a missed connection with Flaming Lips singer Wayne Coyne in Oklahoma City:

"It's not fair to embarrass my bandmates with backstage stories and to withhold all embarrassing details involving me. Full disclosure, Wayne Coyne showed up to watch his bros play. He was clearly enjoying the show, hanging out in a baseball shirt with a flower sticker on his face and his hair a mess. I've always wanted to meet this guy, so I crept around his vicinity for a while. The Jameson was in full effect, so I'm not sure how drastic my creeping got. All I know is, by the time I got the balls up to approach him with a Sweet Spirit record, he was gone.

"I ran, like a distressed action hero, through the dark, dusty parking lot after his car. Then I cried, puffing on a one-hitter through sobs. I walked toward the back door like Charlie Brown, and offered my pipe to the doorman, who obliged.

"The next day, [guitarist] Andrew Cashen's eyes were lit with mirth when he reminded me of my sobbing and my inscription on the vinyl I'd failed to hand Coyne: 'I've waited five years to give you this.'

"Our EP has only been out since February." Housecore Horror has forsaken Austin in favor of San Antonio. The metal and horror flick festival, which brought genre giants to Emo's in its first two iterations, hauls the terror down I-35 to the Aztec Theater, Nov. 13-15. The move represents another huge loss for local lovers of heavy music, still spitting mad that Chaos in Tejas hung up its spikes last spring, and fuels our collective little brother complex to San Antonio's rabid metal scene.

"We love Austin, so don't trip too terribly much, because next year it might be back in your hometown," assures Housecore's head honcho Phil Anselmo. The Pantera/Down screamer says he considers the move true to the vision of festival co-founder Corey Mitchell, the beloved local author who died of a heart attack in the parking lot of Emo's after last year's event. "Corey wanted to bring it to San Antonio at some point. His dream was to do it in different cities, do it in Europe, do it every-fucking-where, man."

According to Anselmo, there was never a question as to whether Housecore would continue in the wake of Mitchell's demise. In fact, it became a way to immortalize his friend.

"He lived for the festival year-round," says Anselmo. "This is what he'd want us to do, so we're going to sail it forth into the night in his honor."

Torrential showers last weekend aborted Wednesday's Blues on the Green kickoff for KGSR, marking Antone's 40th anniversary with Jimmie Vaughan and an unannounced headliner. It's pushed to next Wednesday.

Ethan Azarian hosts his first solo art show in four years this Saturday at the Pump Project Gallery (702 Shady), 5-9pm. Says the songwriter and painter, who fronted Nineties oddballs the Orange Mothers: "As a musician in Austin, you get a lot of practice not being jealous, pissed off, and angry. Now that I'm older I say, 'Wow, I've survived a lot.'" Azarian's art, which you'd recognize from the giant blue cow mural on 30th Street, demonstrates wide-eyed innocence. "I paint my childhood memories," he reveals. "I never went to art school. If I did, they probably would have told me not to paint." Among the 30 large works for sale at "Survive Yourself" is a surreal vision of Austin growth titled The 110 Who Move Here Everyday.

Theron Rhoten, bassist for artsy drone metal act Sans Soleil, is among the 170 bikers in police custody after a deadly brawl in Waco last week. "Theron is a witness at best and to keep him locked up is a true injustice," the band posted to Facebook. Rhoten, who rolls with Austin's Vise Grip motorcycle club – a crew of enthusiasts who build pre-1970 Harley Big Twin choppers – is being held on $1 million bond, charged with engaging in organizing crime. To aid in his defense fund, visit www.visegripaustin.com.

May's Pachanga Festival experienced a downturn in attendance, according to organizer Rich Garza. "Nothing ventured, nothing gained," he notes. "Logistically and operationally, it went off without a hitch. From a marketing perspective, we learned a lot." Garza says he's still perfecting Pachanga's mix of Latin pop, rock en Español, and authentic world music, but it will return next year, although he's not certain if he'll repeat the Texas tour format of two roadshows in Dallas and Houston in addition to the Austin fiesta. 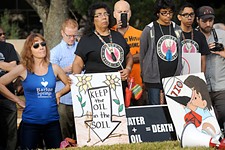