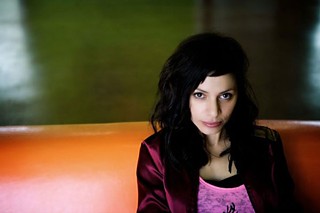 When Ceci Bastida played with ska rockers Tijuana No! in the early Nineties, it was an isolated life for a woman musician, especially in Mexico. At that time, the only visible artists were those signed to major labels – overwhelmingly men. The same era found La Mala Rodríguez bubbling up in the Seville rap scene, yet nobody could believe "The Bad" was a woman. Mexico City expat Bastida on sophomore solo LP La Edad de la Violencia (The Age of Violence): "What made me think about these things when I was writing is that I was pregnant. When you're pregnant, you wish the world would be a better place for the child you're bringing in. I've always talked about social issues and what I see happening around me, so being pregnant made that more intense. I started writing about the violence in Mexico, which is ongoing, but got more intense around 2006."

Rodríguez, meanwhile, forgives Spain for being skeptical of her gender: "Yeah, that's a funny, como se dice ...? This is something I remember from the very beginning. Because I was, you know, very involved, but nobody had seen my face. Nobody knew I was a girl. A funny moment to remember now."

Sariñana, 29, an L.A.-based Mexican native on managing two fan bases: "There's so many paths nowadays, and I love that we're open to experiment and do what feels natural for us. To be honest, we're in a really macho society, in Mexico at least. There was a little bit less pressure when I was working in the States [in terms of] being a woman and what's expected of me. People were very respectful."

Both of Sariñana's parents work in film, her father being director Fernando Sariñana, while her mother Carolina Rivera remains a screenwriter. Their daughter credits them with the strength of November's No Todo lo Puedes Dar (Not Everything Is for Giving): "With this album, I was like, 'I'm going to be 100 percent self-centered, and the only thing I'm going to take into consideration is my intuition.' That makes it the most personal album I've done, because every single note, every single production element, every collaborator came from a very intimate place."

Bastida's mother also informs her work: "My mom always worked and took care of us. And played piano. She was a very independent woman. That was my first example of a strong woman. She did it all in my eyes, and she did it very well. She still does. Now that I have a daughter, I want to be present with her, but I also want her to see her mom as someone who works hard, and has also her own life. It's an important thing to teach your children."

Even embracing her dark MC persona, Rodríguez's fifth studio LP, Bruja (Witch), originates from a similar place as Sariñana's and Bastida's: "My mom is a hairdresser, hardworking, you know. Independent. [That was] very important input from my mother – to be independent emotionally, economically. You have to work many hours a day to have the level of concentration to be in this mood. I always have something to learn. I don't give up. I always fight. I have been an example for other women that, 'Yes, we can.'"