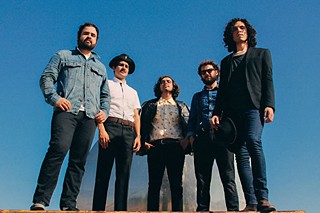 Vocalist, guitarist, and eldest bro Luis shared his experiences via phone from Mexico.

Austin Chronicle: What was South by Southwest like for you this year?

Luis Humberto Navejas: We had a showcase with Robert Rodriguez's band, Chingon. They were projecting scenes from his movies. I'm a movie geek, so it was cool to see the director playing guitar along with his films. That song from Desperado has become a classic for mariachis here in Mexico.

AC: Where does Enjambre stand amongst Mexico's rock scene?

LHN: There's great variety of sounds here. We stay closer to the regular rock format of guitar, bass, and drums, with some organ and synthesizer. Melodically, our approach is nostalgic, like Sixties and Seventies ballads. Musically, we're influenced by classic rock.

LHN: Creedence Clearwater Revival, Led Zeppelin, and a lot of the early Beatles, but we also love progressive rock like early Genesis, King Crimson, and Gong. Vocally, our influences are crooners like Fabian and Albert Hammond. It sounds romantic, even if our songs aren't all about love.

AC: Given that your family lives in the States, why base the band in Mexico City?

LHN: That's where things started happening for us. We had a few tours in Mexico and we realized it's a place where people would really listen to our music. What was supposed to be a short period of time turned into our lives, our careers, and eventually five records. It makes me happy to be the exception to the statistic. People in America say, "Look how many immigrants are here. Can't they stay in their country?" and I say "Yes we can. We're here making a living."