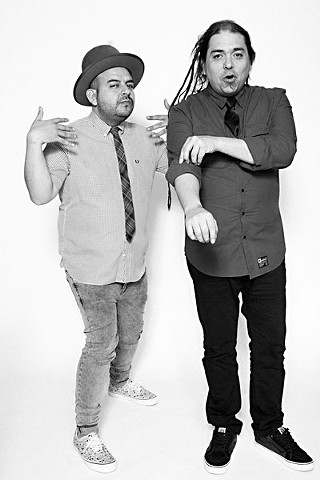 If there's one word that sums up Compass, the new project from Toy Selectah and Mexican Institute of Sound's Camilo Lara, it's collaborative. A second might be lunacy, which neatly sums up the album's scope and ambition. Not only did the project bring together two of Mexico's most prominent producers and DJs, the pair traveled to nine cities around the globe to record with nearly 90 different artists.

"We wanted to create a sort of hub for creativity, and I think it translates when you listen to the album," stated Lara via email while traveling in Europe. "Some sessions were magical."

The guest list sprawls from the Bronx to Brazil and includes everyone from Gogol Bordello to Boy George. Both Lara and Toy Selectah have made careers out of fusing electronic music with cumbia, reggae, hip-hop, y mas, and all are present on Compass. Rhymes come courtesy of rappers including Ohmega Watts, Son Doobie, MC Lyte, and Brazil's Emicida, while Jamaican legends Toots & the Maytals and Sly & Robbie provide reggae bona fides.

Beyond outside collaborations, Lara and Toy Selectah navigated the music together.

"Toy is hi-fi and I'm lo-fi," writes Lara. "He likes to sound amazing, I like to feel amazing. I think he's also a master with beats. I'm more focused on sounds and structure of songs. Creatively, we complement each other."

"We've known each other for almost 20 years. We've been walking very closely and in parallel ways all these years. We are from the same generation and we see music in a similar way, so it was natural to say, 'Let's do an album together.'"

While a much larger stage would be needed to hold every artist that appears on Compass, the duo does their best to bring the album to life as a live show. Toy Selectah plays guitar, and Lara mans the keys while fronting a band that balloons to 10 members.

"This album was about the possibility of making music the old-school way of getting together in person," says Toy. "It reflects different forms of dance floors around the globe, the urban sound of barrios all over."