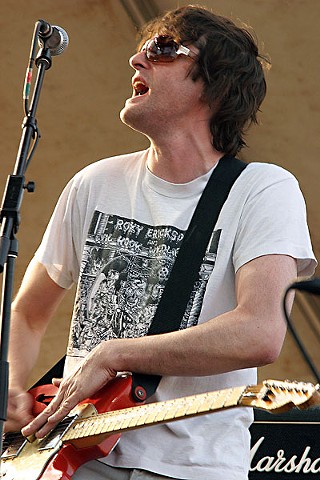 "I've said all my life that I think the most psychedelic song in the world is Buddy Holly's 'Slippin' and Slidin',' and it's not even trying," offers Jason Pierce from his home in London. "It's not trying to make itself that music, but I think psychedelic music is rooted in something deeper than just the kind of tricks people can do or studio effects. It would be nice if you could just throw some effects in there and that would work, but that invariably doesn't work."

"I have this idea that the best of my music sounds like it's been made and then broadcast by satellite, like it's coming from somewhere else," says the 49-year-old East Ender. "I don't go in thinking that this has to be like a cathedral in size. That takes a bit of time to develop."

Recording already begun for a new album, Pierce looks to shift the band's sound once again, tapping Martin Glover (of Killing Joke and Paul McCartney's the Fireman) to produce.

"This time last year, I was stuck and couldn't get anything down," he admits. "Martin offered his help, and he's got a lot of talents I don't have. I was desperate not to make another album that sounded like the last three, and I had this idea that these beautiful pop songs would come after this furious pyschedelia. I wanted to break that mold."