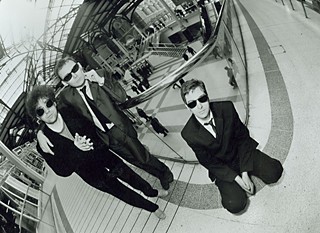 "Rock & roll gave us our lives, you know? We are the people we are today because of being in a rock band. It gave us our identity and it gave us so much to be grateful for."

So says singer Jim Reid of Scottish institution the Jesus & Mary Chain. Clad in nowhere-man black and drenching their audience in a fuzz-gun feedback squall, their sad-pistol scree promised a whole new kind of kick in the face of UK punk's sudden death.

Then they fed us 1985 debut Psychocandy, and became one of the most pivotal bands since the Velvet Underground.

"Well, I'm not sure that's true," says Reid, who, with sibling-cum-sparring-partner William, founded the group two years earlier. "I mean, it's very nice of you to say that, and I would love it to be true, but the Velvets were just in a category of their own."

"[The Velvets] influenced absolutely everybody under the sun," offers Reid. "If we approach that, then great. That's fantastic. I always wanted the Mary Chain to be more than just pure entertainment. I didn't want it to be just a record that you buy in '85 that's chucked in the bin in '87, you know? It was always meant to be around for a long time.

"I think we've been doing something right, because we're having this conversation 30 years after we made the record."

Rumors continue to swirl about a forthcoming new album by the JMC.

"We've talked about this record for too long now. I think it's just time that we actually recorded the bloody thing and got it over with."