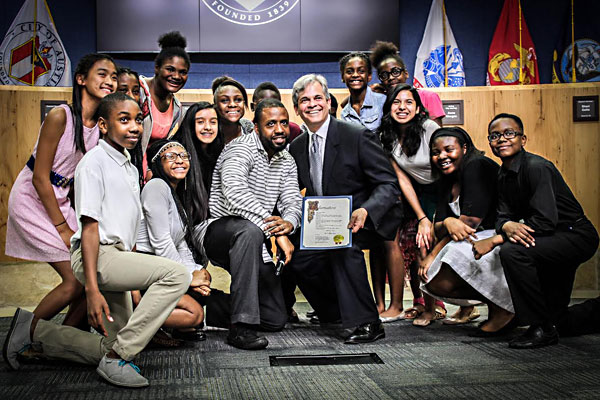 Soon the Council's chambers were shoulder-to-shoulder with several hundred spectators there to witness a proclamation designating April 23 as Bavu Blakes Day.

When Mayor Steve Adler called his name, the local MC – elder statesman to Austin's blossoming hip-hop scene and teacher of seventh graders in Manor – sprang up to the blissful beat of his 2012 single "Big Bright Future." Running the floor while rapping, he commanded 15 students from Decker Middle School who danced and sang the track's hook:

"I got a big, bright future ahead of me."

It's not remotely unusual for the city to honor musicians with their own day. Since 1993, when the tradition began, nearly 700 bands or artists ranging from Grammy winners to cover bands, have garnered such honors. Yet Blakes' day exhibited particular poignancy, not only for his leadership qualifications in the realms of music, education, and spirituality, but also because his performance tore the damn roof off City Hall.

"Eight years ago, I had a chance to do something exactly like this, but on a different day of a different year, so I turned it down because I thought it was corny," announced Blakes, an Austin fixture since the Nineties. "Now I understand, and I confirmed it coming here today; that it's really about the bigger picture – to bring a whole community and different generations together."

Accordingly, he gave the mayor instruction.

"If any artist comes in here and takes [the plaque] for themselves, you should just snatch it back because we are representing for Austin as a whole."

Within the last six months, the 27-year-old Austin native showcased on Conan and Letterman, and on Wednesday approaches a zenith of music videography with his debut taping for Austin City Limits.

"It's certainly burned in my memory," he says of KLRU's 41-year-old music show, which he observed transitioning from an Americana production at Studio 6A to hosting diversified styles on the futuristic Moody Theater stage.

"I think it's far more relevant now than when I was growing up, and that applies to why I'm so proud to do it," offers Graves. "Certain things in Austin feel like they're running away with the ball and not being true to themselves, but Austin City Limits has gotten sweeter with age."

"I had no idea who he was and nobody else seemed to be paying much attention to him," he recalls. "As one-man bands go, he was amazing, but I would hesitate to book something like that because most people would've thought of it as a novelty act."

Noting Graves' development as an artist and, no doubt, his inclusion of bandmates, Lickona offered him an ACL taping after a gig at Stubb's last October. Graves calls it a "dream come true."

"This is part of my city, my heart, and my culture – it's all very close to the chest. I'm not going to use it to promote an album or show off," says Graves, who admits his constantly evolving live show recently generated confusion with concertgoers only familiar with "Dearly Departed."

"I see this as a freeze frame of where I am. I don't know where this is going, but I know where it's come from and I think this is a pretty perfect crossroads."

Shakey Graves tapes at the Moody on Wednesday, May 6, at 8pm. Enter the ticket giveaway at www.acltv.com/upcoming-tapings.

South Austin's musical living room, the Saxon Pub, celebrates 25 years on the scene this week. The silver jubilee kicked off Sunday and continues throughout the weekend with White Ghost Shivers on Friday and Bill Carter and Mike Farris on Saturday. Owner Joe Ables reflects on landmark moments in the club's history.

Most Gigs:
"The incomparable Bruce Hughes. Whether with his own band or playing Mondays with Bob Schneider, Sundays with the Resentments, or Wednesdays with Johnny Nicholas, Bruce is an incredible talent and family."

Most Dangerous Stunt:
"One night when Paula Nelson was booked, she and her good friend Jeff Schwan, a professional movie stunt man, planned a little extracurricular activity during her performance. Earlier in the day, Jeff had brought in a breakaway table, beer bottles, et cetera, and planted them in front of the stage. Later that night, while she was singing with her band, he walks up in a disguise and starts heckling her. When he steps up onstage, Paula, a Taekwondo black belt, kicked him and he flew off the stage onto the table. No one in the audience knew it was staged, including our door staff. They dragged Jeff out of there in a not-so-friendly way."

Most Touching Moment:
"I'll never forget watching drummer John "Mambo" Treanor refuse to give up his Sunday night Resentments gig as he battled terminal cancer. Week in and week out, Mambo would somehow get the strength to perform until the disease finally won out. His love of music was powerful, and it was very emotional to watch him perform during that very difficult time."

Most Notorious Residency:
"You'd think the obvious answer would be the incredible Bob Schneider or the Resentments, but it has to be Rusty Wier. Rusty held court every Thursday night for 16 years and sold a lot of tequila for us. He also demonstrated an amazing ability to perform whether he was fighting an illness or mourning the loss of his mother earlier that day. For Rusty, the show always went on."

Most Memorable Night:
"In the fall of 2004, there was a political fundraiser booked at the Austin Music Hall. Stephen Bruton had asked me for a booking on that particular night and invited all his friends over after the event ended. On that night, the Saxon stage included Stephen, Eric Johnson, Bonnie Raitt, Mickey Raphael, and Michael McDonald."

No Chaos in Tejas: Timmy Hefner confirmed he has no plans for a spring festival this year. Since 2005, he hosted the underground punk and metal stockpile before dialing back with A Weekend in Austin mini-fest last year.

Utopia Fest organizers divulged their 2015 lineup this week. Highlights for the idyllic music and camping fest, held Sept. 4-6 in Utopia, include Explosions in the Sky, RJD2, Tune-Yards, Charles Bradley, Man Man, and Of Montreal. Passes are on sale now for $149. 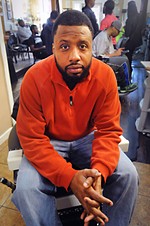 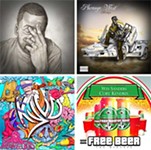