Live Shot: The Who

Zak Richard Starkey – son of Richard Starkey Jr. – has now powered the Who longer than Keith Moon, his godfather. (That's 1996-2015 and 1964-1978, respectively.) The group's Tasmanian drum demon counted Ringo Starr among his closest friends. Monday night at the Frank Erwin Center, Moony was alive and quakin' in the maelstrom of Starkey.

The Who without Moon and late partner in rhythm, bassist John Entwistle, (that's 1946-1978 and 1944-2002, respectively) remains akin to John and Paul without George, and Richard Starkey Jr., Daltrey, and Townshend employ five backers besides Zak Starkey: a tall, stoic geezer in dark specs much like his predecessor on bass, Welshman Giuseppe Henry "Pino" Palladino, plus two additional guitarists (one of them Townshend's "younger, better-looking brother Simon," according to Pete), and a pair of keyboardists.

Zak Starkey out-Who'd them all, including Roger and Pete.

Daltrey's voice rose up and out in better shape than any other period since the first Who farewell tour in 1982. Its 71 years couldn't recede back to 1971 for Who's Next essentials "Behind Blue Eyes," "Baba O'Riley," and "Won't Get Fooled Again," but classic rock radio wore the tar out of those anthems – a term overused in the rock lexicon, only the Who invented the very form – so the band still performs them out of obligation rather than gusto. That was hardly the point, however.

Rather, mid-Sixties pop hits "The Seeker," "The Kids Are Alright," and "Pictures of Lily" found the frontman once again sounding like a kid, alright. "A Quick One, While He's Away," whose "mini-opera" Townshend, 69, acknowledged as the precursor for grander concepts (the Who invented the rock opera as well), sorely missed Moon and Entwistle's completing the song's barbershop quartet harmonies, but Daltrey's still-broad shoulders carried the tune to giddy pleasure, its Vaudevillian oom-pah and Hopalong Cassidy clip-clop lacking only copious pints and a pub brawl at its conclusion.

Segue into Tommy's "Amazing Journey" and "Sparks" then kicked in the Owsley acid like 1968-69 all over again.

Townshend, too, was on, beginning with his windmill-accented guitar manhandling on "The Seeker." He injected Live at Leeds prowess into "My Generation," and the palpable whiff of punk edging 1981's "You Better You Bet" ("our most recent hit," cracked Townshend) egged Daltrey to near vocal gnashing. Starkey, who turns 50 in September, doesn't begin to ape Moon's one-continuous-fill tempest. His style lays back deceptively before becoming an avalanche of sticks and stone cold beats raining down like a meteor shower. During the ancient tribal rumblings of "Magic Bus," he adopted his dad's ambidextrous style, arms at his sides pounding like a runner pistoning through a race. Following Townshend through the Tommy mini-set, Starkey re-lit the material's primal rage.

Too many moments transcended throughout the two-hours-nearly-to-the-minute performance: Townshend's acoustic intro (on a local Collins guitar, maybe) for Quadrophenia's "I'm One" and Daltrey's tour de force summoning of album-mate "Love, Reign O'er Me"; Townshend ending the encore-less show saluting, "Austin, music fucking capital of the fucking world"; and the universality of the "listening to you" segment in Tommy's "See Me, Feel Me," which confirms its author's contention in the Lambert & Stamp documentary opening in Austin on Friday, wherein he says we thought the songs were about him, but they were, in fact, about us – the audience.

A longer version of this review complete with set list and photo gallery lives at Earache! austinchronicle.com/music. 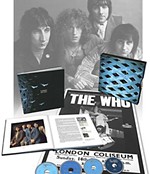 The Who, Joan Jett & the Blackhearts