Concerning albums where politics are paramount, the bad ones blow hard like a college student high on Chomsky, while the best sublimate social unrest into art that's personal and poetic. It's the difference between Anti-Flag and Billy Bragg, and the difference between protest and revolution. Kingdom of Fear, the ambitious third full-length by local rock renegades East Cameron Folkcore, lands heart-first in the latter. "Greed is winning" declares a chilling poem, setting the stage for ECF's four-section concept album, in which voice-of-the-voiceless anthems bleed together in gapless sequence. Blake Bernstein's title track, harkening the melody of John Prine's "Paradise," notes mankind's infantile tendencies: "Still take naps, still drink from the bottle, still cry without cause/ Not responsible for our own actions, it's always someone else's fault." Soon, Jesse Moore's husky throat assails our work-a-day world over thundering floor toms and cabaret horns in "The Joke." Attention turns to Austin on gentrification tragedies "Our City" and "Blackheart for a Beating Drum," harnessing enough passion to crumble condos. At last, the band serenades a sinking ship on the madcap outro of "Into Hell's Sea." Epic in every sense of the word, ECF's hourlong Kingdom of Fear delivers as powerfully as its weighty subject matter. 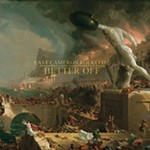