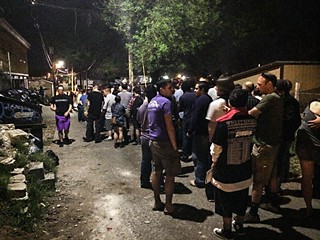 Fans lined up in the alley behind Licha's Cantina after fire marshals emptied a SXSW week Hum concert. (Photo by Kevin Curtin)

While Austin breathes easier after a disaster-free convergence Downtown for South by Southwest, a handful of live music venue owners have been pulling their hair out over what they feel is excessive scrutiny from the city during Festival week.

Between March 14 and March 22, police, fire, and code compliance officers issued 42 citations – many to music venues – for violations related to overcrowding, obstructing fire exits, and failure to display various permits. Few would challenge the notion that enforcement of safety regulations is imperative during SXSW in the aftermath of Rashad Owens' deadly hit-and-run last year. Nevertheless, some contend it's become a scenario where club owners are being unfairly impeded during their most profitable month of the year.

"It's a fucking nightmare. The city was out for blood – writing every citation they could," said one owner of a popular music venue, who didn't receive any tickets but nonetheless felt bullied by Austin Fire Department (AFD) and Public Assembly Code Enforcement (PACE) representatives making repeated inspections during SXSW. "The effect here is critical. Music venues can go away in the blink of an eye, and the way the city is running things threatens the Austin that we've all created."

His refusal to speak on the record was echoed by several prominent club owners or managers who are upset over the same issue yet fear being targeted by city inspectors or being denied permits if they comment publicly. Assistant Fire Marshal David Brietzke says his department generally makes two to three unannounced visits per club annually. Throughout SXSW, bars typically receive two or three more.

In 2014, 37% of overcrowding citations issued by AFD occurred during SXSW. This year, AFD issued 26 citations to venues from March 14-22: 16 for overcrowding, four due to obstructed exits, four for lacking tent permits, and two for not presenting public assembly permits. Compare that to last year, which tallied 13 overcrowding tickets and three for obstructed exits.

"We took bigger precautions this year," confirms Brietzke, citing new tent permits and other safety regulations required by event organizers. "And it was overall safer this year compared to last year, but last year was pretty smooth as well – it was just that we had that unfortunate incident."

Notwithstanding cars plowing into crowds, APD's worst-case scenario during SXSW is a notorious one: West Warwick, Rhode Island, where 100 people died in a nightclub that caught fire via Great White's pyrotechnics. That's why inspectors pay special attention to fire exits – making sure they're unblocked, unlocked, and opening outward. Enforcing proper fire exit code even stands as a priority at outdoor venues.

"We know there's not realistically going to be a fire at an outdoor venue," says Brietzke, "but if there's an active shooter in there, we want people to be able to find an exit and get out safely."

No surprise then, that little mercy comes to clubs with any fire exit infraction. On March 17, PACE cited Seventh Street venue Holy Mountain because someone locked a bicycle to their patio fence and its handlebars extended six inches into the fire exit. Owner James Taylor isn't bothered by the ticket, even though his staff wasn't at fault.

Code violation citations typically ring up between $200-600, depending on deferments from the courts.

Over 230 fans of the band Hum were evacuated from the backyard of Licha's Cantina this year, and only 38 at a time were allowed to re-enter. Crowds were also drastically reduced on the back patio of official SXSW venue Clive Bar on Rainey Street. Both received overcrowding citations.

Brietzke says occupancy is determined mathematically based on square footage, while features like sprinkler systems and number of exits also factor in.

"It's not something we pick and choose on different venues," he says. "Every one is fairly done across the board and subject to fire code rules."

Yet Nathan Hill, co-owner of the White Horse and Stay Gold, says he sought a replacement for the latter venue's misplaced load card to no avail prior to SXSW. He requested an evaluation for a new one and was informed by a PACE lieutenant that they were too busy. When city employees visited Stay Gold on Saturday, March 14, they reduced its occupancy to 49 even though the building was previously approved for 89. That was before a large side patio was added.

"With no cited metric on how that number was decided, we were now set to 49 people for about 3,000 square feet of space and seating for over 100," he laments.

After that, he visited a city office to request a new card, but all staff were out of the office. A week later, he says PACE showed up again. Citing the new occupancy, they cleared out the venue, only allowing 49 people back in. A manager was issued an overcrowding citation after officers counted about 116 patrons.

The ticket also found Stay Gold in violation for not having a public assembly permit – though city law only requires that permit for clubs with occupancy over 50. What's more, Hill says that he was hassled erroneously for a food cart an inspector thought might be infringing on the alley and some electric work that looked new.

After SXSW, Stay Gold was inspected and capacity raised to 92 inside and 183 outside – totaling 275, significantly higher than what they were cited for.

"I don't mind the city coming out during the week and making sure venues are safe. In fact I think it's important," says Hill. "The problems are that they are making rules up as they go with what seems to be very uneducated guesses, a less than basic understanding of code, and that their focus doesn't scrutinize equally.

"Stay Gold at a capacity of 49 is mostly empty. Even at the cited count of 116 it's barely half-full, while Sixth Street is shoulder to shoulder with tens of thousands of people for blocks. Where's the real danger?"

Willie Nelson's Fourth of July Picnic returns to Austin (barely) at the Circuit of the Americas. The braided bard brings along OGs Leon Russell, Billy Joe Shaver, and David Allan Coe, as well as young guns Sturgill Simpson, Jamey Johnson, and Jason Isbell for the 42nd edition of the concert, which hasn't been produced locally since 2010 when it was at the Backyard. Tickets ($35-75) go on sale April 10.

Octopus Project now have Lauren Gurgiolo in their tentacles. The Okkervil River guitarist, whose other band the Dialtones falls in line with OctProj's crafty eclecticism, replaces multi-instrumentalist Ryan Figg.