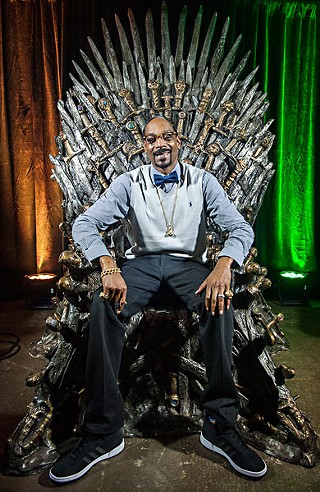 A light drizzle fell, but the downpour eluded us. That felt like the story of South by Southwest Music 2015.

Sure it rained, but never enough for me to bust out the plastic poncho I kept in my back pocket all week. While weather forecasts predicted severe wetness throughout the music portion of the Festival, what actualized were two days akin to being in conversation with someone who spits when they talk.

The magnitude of the citywide convergence that emanates from SXSW also transpired less dire.

"It feels like the South by Southwest of the Nineties," said many a Conference veteran, pleased to be surrounded by others with similar occupational interests rather than vomiting spring break co-eds.

Of course, not being overrun by that ilk or industry hipsters is a double-edged sword. Club owners, bartenders, and pedicab drivers across the board informed "Playback" that their earnings were down this year compared to the spoils of tourist dollars from the recent past. SXSW has long been considered "Christmas" for Austin's Downtown service industry.

Happily, the number of "You'll never believe what just happened!" moments remained proportionate to a festival with a global slice of musical genius.

"Dude, I just saw Bushwick Bill jump up onstage and rap!" was a common phrase last week when the half-pint cyclops invaded any platform in sight. Since this year's narrative arced across 30 years of hip-hop, Too $hort to Joey Bada$$, the Geto Boy joined the scrum by collaborating with a quartet of locals: Kingdom of Suicide Lovers, Amplified Heat, T Bird & the Breaks, and Brownout, who seamlessly slipped into "Mind Playing Tricks on Me."

The Festival's glitziest surprise arrived on Thursday when tabloid pop star Miley Cyrus appeared alongside Mike Will Made-It at Fader Fort, lending vocals on sneaker jam "23" and enthusiastically announcing that she was, indeed, "high as fuck right now!" Additional celebrity sightings included Ghostbusters and zombie killers; Bill Murray took in performances by Best Coast, Ghostface Killah, and the Zombies, while Norman Reedus and Melissa McBride of The Walking Dead were caught rocking to eternal punks the Damned.

Lyle Lovett and Gary Clark Jr. were both spotted strumming guitars on the sidewalk, likely part of an Esquire photo series devised by Andy Langer, who also provided the Austin Music Awards' most caustic moment. After being presented with a bottle of tequila in thanks for past AMA hosting duties, the local deejay and journalist, who doesn't drink, remarked, "That felt like a 'Fuck you.'" Wednesday's local prom sold out on the promise of ATX mythologizing – from the Texicana of heartfelt opener Billy Joe Shaver to head-spinning covers of Blaze Foley, Kris Kristofferson, and Lucinda Williams in the Viva la Diva segment – ultimately crowned by E Street Band guitarist Little Steven Van Zandt igniting the all-star Bump Band tribute to late Small Faces/Faces keyboardist Ian McLagan.

Less evocative was Snoop Dogg's keynote interview led by Ted "what's a follow-up question?" Chung, aka the MC's manager. While the well-attended conversation mostly resembled a promotional event for the veteran rapper's new album and TV series, it did include a priceless story about Willie Nelson out-smoking Snoop while kicking his ass at dominoes before the two buds shared a 20-piece bucket at a KFC in Amsterdam. Word is Menace II Society co-director Allen Hughes was scheduled to host the interview but got snowed in.

SXSW Film was flush with big-screen soundtracks: the startlingly intimate Kurt Cobain doc Montage of Heck, Neil Young's re-edited 1982 comedy Human Highway, and the late, great Les Blank's recently licensed A Poem Is a Naked Person, a 1974 portrait of Leon Russell, who earned a reputation as a good tipper after he dropped $50 in local singer-songwriter Wendy Colonna's jar during SXSW.

The Jones Family Will Make a Way, a film chronicling a family band and their No. 1 fan, wise-ass rock critic Michael Corcoran, came to life with a soul-stirring SXSW showcase on Thursday. Asked if he thought Corcoran, an atheist, would go to heaven, the gospel group's patriarch Bishop Fred Jones smiled broadly.

"Yeah, we gonna get him there."

At SXSW, heaven is hype. By that measure of success, SXSW proved divine for Aussie rock songstress Courtney Barnett, Fort Worth vintage soul man Leon Bridges, and acoustic guitar explorer Ryley Walker, all of whom staked claim among critics as the next big thing. SXSW's huge hip-hop sector, so many of whom repeatedly implored audiences to "turn up" or "get turnt up" to the extent that I never wish to hear that term again, cast additional ranks of buzz artists between the extremes of Mississippi rap brethren Rae Sremmurd and British hip-hop poet Kate Tempest.

Among that genre's artists on the buzz bubble, there were indications of bright futures and dead ends. Toronto-based, locally managed MC Tory Lanez proved himself a live dynamo, literally walking atop the crowd at his packed showcase. Conversely, Kanye West's recent G.O.O.D. Music signee Holt was utterly laughable, prefacing his set with warnings of how crazy the pit was about to get before launching into a limp mixture of Eighties New Wave beats and rap-singing that elicited zero crowd response.

As impossible as it might seem for underdogs to make a ripple in an ocean of 2,200 bands, influential ears were present at SXSW. That much was evidenced by The Washington Post hailing local punks Flesh Lights – specifically drummer Elissa Ussery – for a gripping Beerland set and similarly praising the Whiskey Shivers' "sweat and menace." The latter band likewise amused Sire Records founder Seymour Stein, who tagged along with "Playback" to see A Giant Dog. Music-rag-gone-website Spin demonstrated local love in championing the fashion sense of Holiday Mountain.

No fireworks concluded the appreciably mellow Music Conference. The final night's Latin music fiesta at Auditorium Shores got canceled due to wet grounds, and the mainstream yearned for a Kanye appearance that wasn't going to happen. SXSW tried unsuccessfully to book the hip-hop superstar, who also bailed on a Jimmy Kimmel Live! taping Friday at the Long Center.

As it played out, the hottest ticket in town Saturday was North Carolina's J. Cole, who stoked a packed Moody Theater with tracks from his recent chart-topper 2014 Forest Hills Drive. (A review of which concluded five nights of online coverage at Earache! austinchronicle.com/music.) After inhaling Cole's potent smoke and witnessing the intimidating inspiration of gangster Freddie Gibbs at a later club show, I closed out my SXSW watching Irish noise rockers Girl Band through a window outside Latitude.

As the young band on its first U.S. tour waged nervy sonic war on a capacity crowd, the most important man in Austin that week stood behind me watching their set. Presumably, SXSW co-founder and Managing Director Roland Swenson could've found V.I.P. accommodations anywhere in town.

Run the Jewels were attacked at the Spotify House on Monday. During a performance, an assailant stormed the stage and attempted to punch rapper EL-P before being bounced by Killer Mike and their bodyguards. Killer Mike sustained a torn rotator cuff during the incident.

Austin's Public Assembly and Code Enforcement (PACE), along with Austin Fire and Health departments, issued 42 citations to event organizers during SXSW for infractions ranging from overcrowding to obstructing fire exits. In total, 24 events were shut down, though many were allowed to reopen the same night. Records show a verbal warning was given to an "unknown band playing the back of a van" in the Wendy's parking lot on Thursday.

I found a half-gram of molly on the sidewalk Thursday night, indicating that some still can't differentiate SXSW from Bonnaroo.

A brawl broke out at Gypsy Lounge on Thursday evening, requiring pepper spray from on-site constables. The venue closed for the evening, displacing several performances, but reopened the next day.

SXSW showcasing artist Yung Gleesh is wanted in Austin for sexual assault. The Washington, D.C., rapper stands accused of forcing himself on a passed-out woman at a mutual friend's house on Friday. He fled on foot before police arrived.