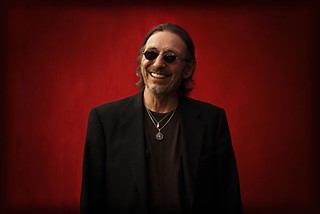 Though his reputation remains that of a government-antagonizing Native American activist – having occupied Alcatraz Island, burned flags on the FBI Headquarters steps, and served as chairman for the American Indian Movement – John Trudell no longer wears the political activist jacket.

He feels more real in the threads of a musician and poet.

"For decades my identity was political, but I've come to understand that there's no political solution when you're dealing with someone else's rules," says the 69-year-old Sioux from his home in the Bay Area. "All politics to me – Indian or white – is an illusion preventing us from being authentic because we're communicating through something that isn't real to us.

"When I left politics in the early Eighties and started writing and recording, my idea was that I could have an influence further down into other generations. That Natives could come into the culture through arts and music."

Such a prophecy plays out on Saturday at SXSW's Native American Showcase, where Trudell's band Bad Dog, whose poetic space blues pull from rock and tribal traditions, headline after sets by Lakota rock duo Scatter Their Own and Blackfire offshoot Sihasin. Edward Sharpe & the Magnetic Zeros, whose vocalist Alex Ebert is a Trudell fan, will also perform.

"I have a real interest in working with younger Native artists," offers Trudell. "I think it's a very important way for Native people to communicate the realities of our culture and remember our ancestors."

Does that then qualify Trudell as a tribal elder?

"I don't have enough fuckin' common sense yet to be an elder," he laughs. "Everybody's image of an elder is elders don't fuck up. Well I still fuck up. So I look at myself as being an 'older.' I'm not a role model. I'm an example."