Six lists to get you through SXSW 2015 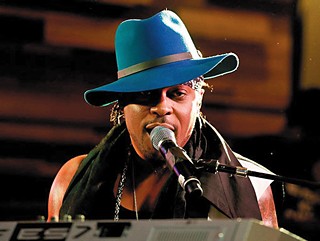 South by Southwest's clamor resembles 1,000 competing conversations. Within the buzz and babble there's inspiration and innovation aplenty, but also shams and charlatans. Your attention is being vied for – by bands and brands – and by deciding where to point your ears, you have power.

No one artist holds the talking stick right now. Last year, Lady Gaga gripped it tight. The year before it was clutched on either end by Justin Timberlake and Prince. SXSW 2015 has no such singular spotlight hog. Had U2's plans not been foiled by Bono's bicycle, the iTunes-invading stadium rockers would've dominated the narrative. Of course, there's Kanye West's ego-mandated mid-March appearance in Austin, but that's become commonplace.

This year thus represents the democratization of SXSW. Given no central focus to monopolize the public discussion, all roughly 2,200 performers – from Inuit throat singers (Tanya Tagaq) to local guitar slingers (Danny B. Harvey) – enjoy a boost in relevancy. This isn't to say SXSW didn't book headliners. They're mostly hip-hop acts, leaving the ever white-washed music industry scratching its head saying "Where's Arcade Fire?" Worry not, both Will and Win Butler are in attendance.

What other gathering can match SXSW's rap firepower? Not Atlanta's A3C, not Jay Z's Made in America. No one.

While the conference's compass-referencing moniker might confuse artists stationed below the equator, SXSW remains a hub for foreign bands, hosting hundreds of performers from six continents. (Antarctica's music scene still sucks.) Another mind-blowing element of SXSW: No other U.S. festival offers such an array of international talent.

Get adventurous with one of two Korea nights (Thursday at Elysium, Friday at Majestic), or catch a band from a country you've never heard of (shout-out to the Qarabagh Ensemble from Azerbaijan.) Sadly, you've already missed Japanese stadium-packing electro-pop trio Perfume, who played their only local show last night. There's still time to witness SXSW's first Pakistani music showcase tonight (Wed.) at the Driskill's Victorian Room.

Somewhere among the foreigners showcasing at SXSW 2015 may be the next Manu Chao, Die Antwoord, or Lorde. In 2014, last month's Grammy telecast stars Hozier and Sam Smith shared a showcase at the tiny St. David Historical Sanctuary. Today, that bill would sell out Joel Olsteen's Lakewood mega-church.

Global also encompasses the local via an estimated 282 Austin acts, ranging from nationally beloved staples like Spoon and Asleep at the Wheel to agents of the underground like hardcore oi youths Breakout and experimental beat punisher Ssleeperhold.

Every year, emerging artists blow into SXSW with the perfect storm of industry support and word-of-mouth. In 1996, the Fugees became superstars. In 2011, Odd Future went atomic. Last year, I was beat over the head with the name London Grammar and haven't heard of them since. Fickle "buzz" finds a handful of acts ripening for SXSW.

The Weeknd: R&B futurist and new Artist of the Year at the Juno Awards

The polar opposite to breakouts are reunions. Whether drumming up press for a nostalgia tour or testing material for a decades-in-the-making new album, SXSW remains proven ground for reconciliations. The Festival didn't land a preview of the upcoming *NSync reunion (thank God) or reformed riot grrrls Sleater-Kinney (Austinites have to wait until April), but this week finds old favorites back in action.


SXSW attendees are faced with three choices during the daylight hours: 1) Stay in bed and recover from the previous fun; 2) feed your brain with panels, speeches, and Flatstock; or 3) rage at a day party.

Even in the week diluted with party crashers, Austin's music community remains tight-knit and caring. Accordingly, the SXSW ruckus pauses for moments of tribute and reflection on those lost.

Fearing sensory overload from the competing voices at SXSW? The truth is always in the music, never in the sales pitch, and the best conversationalists are those who listen. Make a connection. That's your mission.