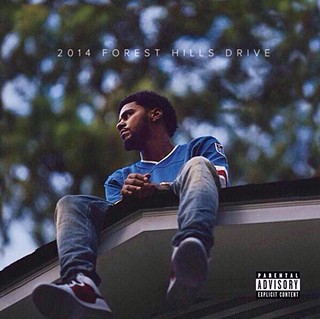 
In the vein of Drake's heady Nothing Was the Same, North Carolina spitter J. Cole takes a long, cold look in the mirror on December's 2014 Forest Hills Drive. Third studio LP since 2011, its intro serves as a heart-melting MC dalliance, leading into the jazz-infused eulogy "January 28th." In a nostalgic, real-time account of losing his virginity, "Wet Dreamz," Cole's all adolescent bravado, but must finally admit: "I ain't never did this before, no." Beyond that breathless moment of genuine honesty, the Fayetteville son bemoans he was too young to land Lisa Bonet – her husband, Game of Thrones actor Jason Momoa, could destroy Cole with just his eyebrows – on the otherwise socially biting "No Role Modelz," which could be a clever joke on Drake's Rihanna fixation or a copycat situation. Fifteen-minute "Note to Self," with its gentle backup chorus of Kaye Fox, T.S. Rose Desandies, and Yolanda Renee warps into an extended thank you and acknowledgments. (Sat., 10pm, ACL Live at the Moody Theater)