"If you buy a car, for the first five years it's brand new," ruminates Steve Kilbey, bassist/singer for Australian quartet the Church. "Then after 20 years, it's an old car. You go to the garage and the guy goes, 'Hey, I don't know why you want me to fix it. You should get a new car.'

"But if you hang on to it, eventually you've got a vintage car that suddenly has become worth something again."

During its Eighties heyday, the band's hit "Under the Milky Way" beguiled the airwaves with psychedelic guitar swirls that helped germinate alternative nation. Since then, the Church has endured creative entropy, poverty, and guitarist Marty Willson-Piper's abrupt departure. A lifetime achievement award from the Australian Recording Industry Association relit the fire.

Now, with the assistance of Austin entrepreneur/megafan Kip McClanahan, Kilbey, guitarist Peter Koppes, drummer Tim Powles, and new guitarist Ian Haug go Further/Deeper with a showcase at SXSW for the first time since 2004.

"This new record is one of the best we've been involved with," asserts Kilbey. "You couldn't say that there's a track on the album that doesn't have a lot of love and thought put into it. We're competing against our own legacy, and the kind of prejudice that comes with that.

"Sometimes when you're making really good music, people can't see what it is," continues the singer. "Look at Big Star and their third album – people couldn't understand how brilliant it was at the time. That happens to the Church. Some new musical thing comes in, we get bad reviews, the critics can't understand or like us anymore, and we just seem old and tired.

"Then, after a few years, there's some kind of re-evaluation. Maybe we've become a bona fide classic band. People are happy we're even still around. That we're still making good music is a bonus." – Michael Toland

Everything moves faster in the Internet age. Even so, the rise of Fort Worth's Leon Bridges can only be described as meteoric. The young soul singer with impeccable style has released just two songs from an album with a possible June release date, but those songs garnered more than a million plays on SoundCloud within a week of their release.

"A couple of months ago I was still washing dishes," explains the 25-year-old Texan. "I never thought that my music would grow and people would know about me. I would never have expected all the opportunities that have happened.

"I wasn't sure if I'd be ready for it, but I'm just learning along the way and doing pretty good so far. A lot of it has to do with the songs, and the way people are responding to it."

Among the many remarkable breaks for Bridges was his discovery by Austin Jenkins and Josh Block of local alterna-rockers White Denim. The duo are so enamored with Bridges' authenticity they've become part of his stage band and produced his disc. His songs return the listener to a much simpler time, garnering comparisons to Sam Cooke.

"I heard of Sam Cooke when I was a kid, but I never really listened to him," admits Bridges, freshly signed to Columbia Records. "When I started writing songs about four years ago, I was listening to hip-hop and neo-soul. I had a song about my mom, 'Lisa Sawyer,' and it just seemed to fit that old sound.

"A friend of mine asked me if Sam Cooke was one of my inspirations and I felt bad because I had never really listened to him. So I started to dig deeper, and that's when I found my voice within that style." – Jim Caligiuri 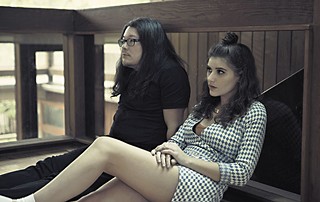 "The first year we came to South by Southwest was right after we recorded Crazy for You. We played like 12 shows in four days," estimates Bethany Cosentino. "I kinda always made the mistake of drinking too much before all our important shows, so I've already made a very adult decision to wait until work is over before I start enjoying the free beverages this year."

That's not something other luminaries would admit, but L.A.'s Best Coast was founded on honesty. From the balmy, lo-fi chimes of her earliest songs to the heartland country of her more recent, more produced work, you could always count on Cosentino not to bullshit you.

"Drake writes about super personal things, and you can tell he doesn't think twice about it," says Cosentino. "He talks about some stripper he fell in love with, or how he's been working on his relationship with his dad. He talks about real things that I can relate to despite the fact that I'm not a 28-year-old rapper.

"With this record I went a little bit further with my honesty."

Best Coast are members of the 2010 indie-rock boom that brought us acts like Wavves and Sleigh Bells. As the attention waned, Cosentino hasn't wavered. That was never the point anyway.

"I'm just doing this because I love doing it," says the singer. "I love those young fans that come up to me at shows. I'm 28 and still relating to these 17-year-old girls." – Luke Winkie