Globally renowned jazz (Vijay Iyer), blues (Fatoumata Diawara), gospel (Soweto Gospel Choir), reggae (Alpha Blondy), even country (Lyle Lovett), and ... pop (Molly Ringwald) arouse the French-Canadians of Quebec. The Texan hypnotizes an audience similar to his sold-out run on Sixth Street at the Parish: young women up front, men behind them, and live music veterans making up an outer ring. All of them plug into this one-man show strumming electro-folk and beating on a suitcase with his foot.

Now in no obvious way could this offhand scene compare to Gary Clark Jr.'s national christening at Eric Clapton's Crossroads guitar festival three summers earlier outside of Chicago. When the also Austin-born guitarist lit into Josh White's "Jesus Gonna Make Up My Dying Bed" that unforgiving afternoon in a soccer stadium, a star was b-o-r-n (dig up our report, "Crossroads 3," July 2, 2010). And yet, the undeniable grandeur of that moment echoed in young Alejandro Rose-Garcia (Shakey Graves) stopping a far more modest beer garden assemblage in its tracks.

ATX takes for granted its homegrown musical heroes until they begin selling out their every local appearance – Willie Nelson, Spoon. Moreover, seldom can it experience them through the eyes and earholes of their tour stops. Graves and Clark today make their livings the same as other successful musicians – on the road. When the two met by chance on East Sixth Street last August (re-read "Full Circle," Sept. 26, 2014), their point of intersection couldn't have been more grounded locally.

Incubator – hothouse for talent. In his reportorial roll call, "The Big Picture" (Nov. 28, 2014), singer-songwriter scholar Jim Caligiuri traced four generations of sisters doing it for themselves here in cow town. Grand dames Marcia Ball and Eliza Gilkyson released catalog peaks last year, The Tattooed Lady & the Alligator Man and Grammy-nominated The Nocturne Diaries respectively, while the flood gates they once breached broke open a tsunami of the fairer sex and their platinum platters.

Together, these seven women dust off state and local standards as the elders once did; Nanci Griffith decades ago at the Hole in the Wall, and Lucinda Williams busking just down the Drag from her. 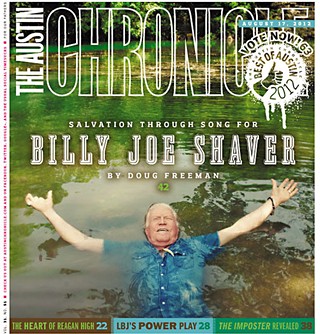 In both the Small Faces and Faces, the sprightly keyboardist, who died at home in Austin last December at the age of 69, aided and abetted a musical bunch of hooligans – including another onetime local, the late, great Ronnie Lane – in besotting English folk and American blues into bar rock of the ages. At the time of Mac's death, KUTX was spinning his and Alejandro Escovedo's duet of the Kinks' "I'm Not Like Everybody Else" into a hit. As the godfather of our scene, the True Believer stepped up first to pay tribute to McLagan.

The Bump Band, the honoree's Lucky Lounge pub rockers: no brainer. And AMA Musical Director Charlie Sexton is still at this very second ringing up potential guests you wouldn't believe one man could have in his PDA. That he put in a call straight off to Patty Griffin and she was available continues to short my circuits.

Billy Joe Shaver, song laureate of this state, begins the entire evening. He's my personal get, a pure musical soul who once let me baptize him in Barton Springs for the sake of a Chronicle cover. This town's an honest-to-God miracle.