Home (of the blues) boys: (l-r) Will Bridges and Kris Krishna

Antone's was christened with a six-pack of Lone Star beer late Tuesday night. News had broken earlier in the day that Austin's world-famous Home of the Blues had secured residence on East Fifth Street, closing a 14-month chapter of homelessness, and beginning a new one where the club returns Downtown. Co-owner Will Bridges supplied the celebratory suds, inviting myself and Kris Krishna, manager of Antone's partner Gary Clark Jr., inside the old brick building. 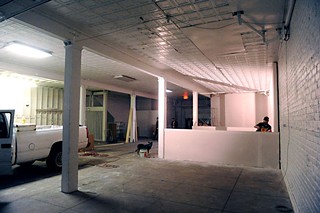 A wide-open, whitewashed space with cement floors below and ancient tile above greeted us. The antiquated room breathed timeless vibes on par with Antone's 40-year history and required little imagination to picture a rear stage facing 400 heads. A side room in front will serve as a gift shop and the upstairs, post-renovation, will house a green room, offices, and extra event space.

Krishna and Bridges were the first Antone's affiliates to lay eyes on the real estate that once was Maxey Glass in early November, and they immediately recognized its potential. Susan Antone, sister of late Antone's founder Clifford Antone, offered a benediction at first sight: "The blues are already here."

Bridges, who along with famed geneticist Spencer Wells captains the Antone's partnership, had scouted spaces for nearly a year and took serious runs on several. Returning the club Downtown, where it all started in 1975, remained a priority throughout. Occupying that territory with music makes a statement.

"There's no amount of money or development that will make or break Downtown," asserts Bridges. "What it needs is cultural investment and that's our generation's responsibility. If we don't roll up our sleeves and get our hands dirty now, we're really not going to like what Downtown's become in 20 years."

That's exactly how long Bridges and company have secured the space at 305 E. Fifth St. Though ink only recently dried on the lease, the Antone's team has spent the months since discovering the space designing the venue and bar layout, and securing key staff hires, including a yet-to-be-announced booker.

This counts as Antone's sixth location, and it's a rarity in Austin history for a venue to survive so many moves. Bridges considers Antone's the lifeboat of Austin's scene, a reliable vessel that moved around and kept musicians and club workers afloat while other venues came and went.

"It was the resilience of Antone's that represented hope," he nods. "People expected it to stay open and that's important because people could say, 'As long as it's still going, we're gonna be okay.' We want to be the lifeboat again."

Since the building was already leased for South by Southwest, Antone's extensive remodel begins April 1 and Bridges would rather pace the project with longevity in mind than rush to open for the club's 40th anniversary in July.

"As important as that is," he says just as the beer runs out, "I'll tell you one more important date: the 50th anniversary."

March! Right now that sounds more like a command than the month. As the calendar flips onto what's simultaneously the most exhausting and provocative page of Austin's year in music, the frequency of South by Southwest announcements go from drizzle to downpour.

On Tuesday, another piece of the puzzle fell into place with the news that Spoon, Charles Bradley, and Superchunk frontman Mac McCaughan play a free concert at Auditorium Shores on Thu., March 19. Last week we learned that Latin luminaries Intocable, Bomba Estéreo, and Compass make musica at Lady Bird Lake on Saturday – leaving only Friday's freebie to be determined.

Many cards remain up SX's sleeve, of course. Like who'll deliver the Music keynote speech.

Likewise, the dizzying barrage of day parties are popping up faster than pimples on the back of a high school weightlifter – and options mean decisions. Do we trip out to Willie Nelson's Luck Ranch to hear the Red Headed Stranger strum, or scan for the secretive Illmore house and its hip selection of DJs and rappers? Do we support local business via Waterloo Records' day stage, slated to host Ryan Bingham and Joey Badass, or patronize a company renowned for underpaying artists at the Spotify House, which has buzz Belgian Stromae. Then there's the Chronicle's Thursday afternoon blowout with Sweet Spirit, Anya, Bop English, and Flesh Lights.

At least I can scratch Fader Fort off my dance card. The big Kahuna of free SXSW events has gone invite-only this year. Oh, such elitism. I'm proud to say I'm not on the list.

The Dicks From Texas

"Nobody could put their finger on why everyone liked the Dicks," assesses filmmaker Cindy Marabito. "Here's this fat, cross-dressing, flamboyant-but-macho lead man, these criminal-looking bass and guitar players who looked like they'd slit your face open, and a fuckin' kickass drummer. But it just worked.

"That music struck a chord."

"A snot-stain on a wall would've done justice to the Dicks!" exclaims Dicks singer Gary Floyd, "but Cindy went out of her way to tell a very honest story of the band."

"To get all these people to get together and record Dicks songs 300 years later?" Floyd wonders aloud. "I'm as touched as you can be."

"Who wants to see a bunch of old dicks?" he cracks.

Kent Finlay's swapping songs in the great beyond. The singer-songwriter, who nurtured artists at his Cheatham Street Warehouse in San Marcos, died at the age of 77 on Monday. "Country music – and just music in general really – lost a great friend today. His legend will live forever in Texas," read a statement by George Strait, whose Ace in the Hole band debuted at Cheatham. Finley always began songwriter nights with the same tune: "As long as your listenin', I'll keep on pickin'. Sing me a story and tell me a song."

Fringe 105.3FM abruptly flipped formats on Monday, transforming into "Classic 105.3" – a real shock to listeners expecting to hear the Clash and instead getting an earful of Phil Collins. JB Hager stays on as morning host, but his partner-in-crime Sandy Mcllree has gone the way of station manager Ray Seggern, who left in January.