Announcing the 2014/15 Austin Music Awards bill, the 13th Floor Elevators reunite for Levitation, and King Coffey recovers after being struck by a car Whether you're native or migrative, stayed or strayed, here for a show, or avoiding the snow: "All roads lead to Austin."

Those five words serve as the theme for the 2014/15 Austin Music Awards and they never ring truer than during South by Southwest, within which we stage the local version of the Grammys on Wed., March 18, at the Austin Convention Center ballroom, 7:35pm sharp.

Change demands reinvention. Last year, veteran Chronicle scribe Margaret Moser retired after three decades of directing nearly every aspect the AMAs. How do you replace the irreplaceable one? Not easily. For starters, she still crunched the raw ballot data this year. Meanwhile, the annual duties of the tireless music matriarch has taken at least a dozen hands to handle. That team, led by event producer extraordinaire Celeste Quesada, works for a bigger, faster, smoother award show with the same hyper-local focus. We've also hired a proper music director. You might have heard of him: Charlie Sexton. The native guitarist has played alongside Tom Waits, David Bowie, and regularly sidemans for a famous Minnesotan some call Zimmy, so he can handle the gig. The six-stringer remains a magnet for great musicians, evidenced by his killer house band of keyboardist Michael Ramos, bassist George Reiff, and drummer Conrad Choucroun.

Moser's absence conscripted our Music staff – myself, Chase Hoffberger, and Editor Raoul Hernandez – into the AMA talent committee. Not to brag, but damn we nailed it. The show opens with a mass baptism from greatest living outlaw songwriter Billy Joe Shaver. Then, inspired by a chance encounter I witnessed between Shakey Graves and fellow Austin High School graduates Phranchyze and Gary Clark Jr., we devised the "Return to Austin High" segment that features those three, plus alumni Suzanna Choffel, Warren Hood, Elias Haslanger, and Eve Monsees in various combinations.

The tribute to the Small Faces/Faces mainstay, who died in December, currently includes Patty Griffin, Alejandro Escovedo, and Mac's Bump Band. Don't be surprised if some of the tributee's legendary British buddies appear as well. After all, it's the Austin Music Awards, and all roads lead to Austin.

We've stood on the 13th floor, waiting eternally for the elevator to arrive. Last Thursday, we finally heard the "ding." The 13th Floor Elevators, the consciousness-expanding Austin band that shepherded the psychedelic rock movement of the mid-Sixties, will reunite for a one-off performance at the Levitation festival, May 10.

The news floored music fans near and far. A friend in California immediately bought festival tickets and airfare, another in town admitted weeping upon first notice. Fans of psychedelic music everywhere brace themselves for sound waves they never dreamed would reverberate again.

The reunion includes local singer/guitarist Roky Erickson, bassist Ronnie Leatherman, drummer John Ike Turner, and jug-hooting lyricist Tommy Hall. Stacy Sutherland, whose jangly guitar was elemental to the 'Vators sound, was shot and killed during a domestic dispute in 1978. Levitation organizers reported that special guests will join in. That'll likely include members of host band the Black Angels, who are well versed on "You're Gonna Miss Me" from touring as Erickson's backing band. ZZ Top's Billy Gibbons, who last year staged a reunion of his Elevators-loving early band the Moving Sidewalks, showed interest, but couldn't overcome schedule conflicts.

The hometown show, coinciding with the Elevators' 50th anniversary, will be their first proper reunion since disbanding 45 years ago, notwithstanding incomplete lineup appearances in 1973 and 1984. While Erickson, Leatherman, and Turner are all active musicians, Hall hasn't blown much jug in the interim.

When contacted by phone at the cheap hotel in San Francisco's Tenderloin district where he lives, Hall was eager to go on record discussing jazz, marijuana legalization, America's need for a conservative president, and Elevators-related philosophy. The 71-year-old remains astonishingly far-out and brilliant, proclaiming his life work to be understanding the existential mathematics that brought this quasi-material abstraction of a universe into apparent reality. Those ideas, he says, have always informed Elevators' content.

"It's all based on the hierarchy of ideas," he explained. "That's what the pyramid is. Then we climb that or advance along those lines."

Equally relevant to the reunion is Hall's belief that consciousness expansion can lead to eternal life.

"That's part of the thing of the Elevators," he said. "That we'll live forever."

Portions of this report originally appeared online at "Earache!"

"I'm okay, just extra ugly," King Coffey joked three days after being struck by a car while carrying his drums across the street before a gig.

On Friday night, the Butthole Surfers drummer and Trance Syndicate label founder was loading in for a performance at Trailer Space Records when he was struck on Rosewood Avenue by a motorist who presumably couldn't see the black-clad rocker in the dark. Eyewitnesses report that police, fire, and EMS all responded to the bloody scene. Coffey was taken to Brackenridge Hospital where he was treated for a fractured rib and wrist as well as a head wound requiring 10 stitches.

Coffey was playing with his new trio USA/Mexico, which features Shit & Shine bassist Craig Clouse, who most recently played with Coffey in Same Sac, and Owen McMahon of Cherubs. Because Coffey's snare hand is in a cast, USA/Mexico has canceled its March 3 booking at Hotel Vegas and is questionable for a March 19 day set at Beerland.

Portions of this report originally appeared online at "Earache!"

NPR's Tiny Desk Concert contest yielded over 150 entries by Austin artists ... and none of them won. As a consolation to locals vying to impress Bob Boilen, "Playback" has decided to host a low-rent version of the contest. Send me a song at kcurtin@austinchronicle.com, and I'll pick a band to be recorded performing in my home office. We'll then post the video on the Chronicle's website.

Gary Floyd canceled his appearance at End of An Ear this Friday due to non-life threatening illness. The gay punk icon's new memoir, Please Bee Nice, chronicling his childhood in Palestine and creative episodes with the Dicks, Sister Double Happiness, and Black Kali Ma, is still available at the South Austin record store. Co-author David Ensminger describes Floyd's writing as poetic and influenced by his karma-driven philosophy. 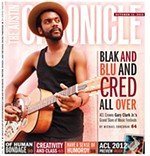