Vote in the Austin Music Poll or else 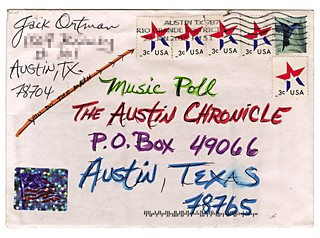 One of this year's actual mail-in ballots

Live and die by Austin music? Here's your shot at local immortality. As you'll grok in this week's Music feature on Robert Earl Keen, all roads leading out of Austin begin in the garage of our homegrown scene – even for a Texas icon such as REK, who took home Best Songwriter in the Austin Music Poll for his 1984 debut LP No Kinda Dancer.

With the Poll closing on Wednesday, I got the rare opportunity to peek at some preliminary results and noticed a ton of nail-biters. Over a dozen categories are still too close to call, among them: Musician of the Year, Album of the Year, Best Recording Studio, and Best Local Label. If you don't believe every vote counts, Best Punk Band, Best String Player, and Best Horns all need tiebreakers. Also neck and neck, new ballot entries Best Venue to Play and Best Music Store.

Some new categories have me questioning the intelligence of my peers. Outside Austin City Limits Music Venue refers to nightclubs on the periphery of town or in the surrounding area, but responses have been Portland, New York, and – wait for it – Austin. And keep in mind that Best Music Writer refers to journalists such as yours truly (ahem) rather than people who write music. Graham Reynolds surely appreciates your votes, but he probably prefers the term composer!

Now what would the poll be without a little ballot-stuffing drama, right? I foresee at least one band losing its highly suspicious 900-vote lead in Band of the Year due to scamming. Remember, there's nothing wrong with voting for yourself, but you can only do it once.

The more people vote, the more accurately the awards reflect Austin's true tastes, especially with the results becoming public as the whole world looks on ... during South by Southwest. Vote today – write-in ballot on p.3 of the print issue or online at austinchronicle.com/musicpoll – and see the winners at our Austin Music Industry Awards on March 9 and the Austin Music Awards, March 18.

The Eastside's got soul, no doubt about it. And with a new lounge on Cesar Chavez, it's also got jazz, funk, Afrobeat, surf rock, and a little bit of blues.

Stay Gold (1910 E. Cesar Chavez) celebrates its grand opening Friday with Hard Proof Afrobeat followed by a Saturday night special featuring the Soul Supporters. Pedal steel ace Bob Hoffnar, who sat in with Iggy Pop at Mohawk during the punk godfather's last local visit, will maintain a Wednesday residency of his experimental jazz quartet Mood Illusion at the 80-capacity bar, which will host live music five nights a week with no cover charge.

"We're not trying to reinvent the wheel," she says. "We just want to get music that's not yet represented in the Downtown circuit and expose people to artists they haven't heard if they don't go to the Elephant Room, Skylark, Sahara Lounge, or C-Boy's." 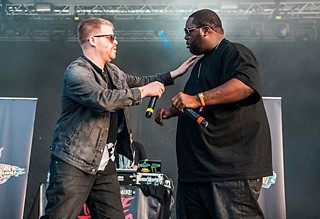 Forty-eight days. That's how long we have until the South by Southwest Music Conference hits. Take your vitamins and try and get some sleep.

Across the board, the busybodies in Austin's music industry begin preparing now for the most intense week of the year. Bookers book, bands double book, event organizers file permits, club owners entertain rental offers, and music critics mine a massive lineup of obscure acts for diamonds in the rough.

For all we do know, there's more we don't. The biggest names have yet to drop, the keynote speaker remains a mystery, and multitudes of freeloader shows, from day parties to SXSW's free concerts in the park – which this year return to Auditorium Shores – have yet to go public. Soon enough we'll all be overwhelmed with information.

Until then, some scratching at the surface reveals what won't be happening. For starters, the 62-foot-tall vending machine known as the Doritos stage, dispensing pop star performances annually since 2012, won't be plugged in this March, SXSW confirms. The polarizing activation, dually anticipated and resented, made headlines last year when the city denied permits for Lady Gaga to perform inside it. Another talked-about event from last year, the iTunes Festival, which packed the Moody Theater with stadium-level entertainers like Pitbull and Coldplay, won't return either.

"Brands deciding on their involvement at South by Southwest is somewhat similar to how the bands decide whether or not to come and play," reasons Brad Spies, who manages brand development for SXSW. "Do they have a new product to promote, an idea to test, a message to get out, or do they just love being involved year after year?"

With no iTunes Fest occupying it, one of Austin's biggest and best concert spaces, the Moody, remains ripe for something huge during the third week of March. High-ranking sources say U2 was planning a SXSW concert there, and indeed, the Fest confirms that Bono was initially considered for the keynote, but both plans shattered with the singer's shoulder in his bicycle wreck.

Where safety's concerned, the city reduces temporary event permits by 25% this year and applications will likely max out early next month, according to last week's press release from Austin's Center for Events (ACE). ACE will also newly enforce already existing city code regarding outdoor music at temporary events, which must now cut off by 10:30pm Sunday through Wednesday, 11pm on Thursday, and midnight on Friday and Saturday, and earlier if within 600 feet of a residentially zoned property.

These are just a few corners of a huge jigsaw puzzle. We'll add more pieces as they materialize.

Charlie Sexton had a "Ball and Biscuit" onstage with Jack White at the Austin Music Hall last Saturday. Bob Dylan's guitarist is currently hard at work as musical director for the Chronicle's Austin Music Awards on March 18. Great gig for someone with numbers for Keith Richards and Ron Wood in his cell phone.

Joe Allen, the friendly merchant with a shopping cart full of used treasures who hangs out behind the Continental Club, was struck by a car on Jan. 21, according to Dianne Scott's "Continental Confidential" newsletter. Allen sustained a broken hip and facial injuries, but had surgery and is expected to make a full recovery. "Playback" still occasionally wears the black and red cape he bought from Allen last year.

A version of this article appeared in print on January 30, 2015 with the headline: Playback: Austin Music Poll Tiebreakers
More Playback columns

One, Two, Tres, Cuatro: I Got a Line on You
Of poles and polls