Playback: Hanging in the House of Songs

The House of Songs, Hotel Vegas on tour, and Terminator Too: Judgment Play 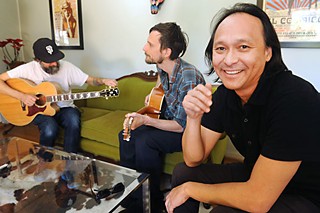 Up on a hill in South Austin, a cozy white house stands indistinguishable from neighbors on the block. Inside, though, guitars are omnipresent, strangers raised on different languages pen tunes together, and the laid-back lifestyle of an Austin musician is regarded as a cultural experience. Welcome to the House of Songs.

The retreat hosts international musicians for two- to three-week stays as they co-write with locals and play concerts. Founded in 2009 by local rocker Troy Campbell and two Danish musician guilds, the House of Songs has since laid out the welcome mat for 1,000 songwriters, largely from northern Europe, on trips financed by various musician unions. Campbell's the gatekeeper: selecting participants, pairing collaborations, and maintaining the house.

Five years in and busier than ever, the House of Songs was at capacity last Wednesday with five Danish musicians lodging there. While one strummed in the kitchen, a knock came on the door.

"Don't worry man, I don't even know you," replies the host. "I'm Troy, who are you writing with today?"

"Jins?" he says, butchering the pronunciation. "I've never done this before."

"Okay, he's around the corner," Campbell shrugs. "Just enjoy yourself."

Campbell smiles. This reminds him of how things used to be in South Austin: easygoing musician houses with people coming and going all the time.

"Sometimes I walk in and find a band from the Continental Club that they met the night before, hanging out drinking and playing music," he says. "That's what it's all about!"

The House of Songs frequently attracts outsize visitors. In October, the Replacements hung out to shoot documentary footage while in town for ACL Fest. Last week, it was professor Birgitta Bergvall-Kåreborn from Luleå, Sweden. Next month, Campbell and Charlie Sexton travel to Luleå to film Austin artists collaborating with musicians who make instruments out of ice – part of a prospective television spin-off entitled Cities of Songs.

Bergvall-Kåreborn regards the House of Songs as the musical application of a larger concept.

"Cities like Luleå and Austin can improve by building relationships and establishing networks," she notes. "Collaboration is important, not just with music, but city offices, companies, and universities."

The idea that cultural collaboration provides mutual benefit holds true for local musicians involved in the House of Songs. Singer-songwriter Aimee Bobruk has co-written 30 songs through the program and seen 18 published overseas. The fluttering "It's About Love," penned with Danish pop duo Hush, charted in Denmark and afforded Bobruk the opportunity to perform for a huge crowd at Denmark's Jelling Musikfestival.

"Troy told me he wants House of Songs to be a doorway into opportunity," recalls Bobruk. "He gets Austin artists involved, and we take it from there. Once we connect with these musicians, I can travel over there, they can come back here, or we can tour together."

Bobruk's capitalized, now hitting Denmark several times a year and currently contending in Europe's Eurovision Song Contest. Think American Idol with original music. It's also been a boon for Matt the Electrician, who reports getting substantial foreign royalty checks from House of Songs collaborations, although he mostly relishes the craft.

"You're entering into it solely to collaborate with another human being, with no idea what it will lead to," he reflects. "Writing a song with someone when you don't easily connect with language means you both have to listen more, and listening is how you learn."

With vans tuned up, passports in order, and shows booked, the Hot Burrito To-Go Family Vacation 2 prepares to peel out of town. In the proverbial driver's seat, Hotel Vegas paterfamilias Jason McNeely, revving up for his debut run as a tour manager for a local lineup he assembled.

"This is my idea of a vacation: going out on the road with my friends, the people I like to be around, the people who've stuck by me," says McNeely, whose Hot Burrito production company booked Spider House before moving to Hotel Vegas two years ago. "There was no strategy with putting this lineup together, except to have fun."

The five-date tour rolls through El Paso, Tucson, Tempe, Tijuana, and Los Angeles, where the four bands, and Burger Records associates Gap Dream, play the Troubadour for a Last Call With Carson Daly taping. The TV connection developed during South by Southwest, when Daly's crew filmed bands at Hotel Vegas. If that isn't the anchor date, it's Tijuana, where the gang joins Gal Pals and Lorelle Meets the Obsolete at the Vegas-esque Mous Tache bar.

"It's my dream to promote shows in Mexico," enthuses McNeely. "I've played down there before, but this is the first concert I've booked, so it's exciting."

"If it all goes all right, this will be the start of a regular thing," promises McNeely, "where once or twice a year I take my favorite bands on tour."

"It's like Saturday Night Live meets a Gwar concert," explains Los Angeles-based director Thomas Blake about his comedic stage adaptation of Terminator 2, hitting Red 7 Tuesday and Wednesday, 7pm. "We only perform in rock clubs because there's too much fake blood and confetti for a theatre. Also, people need to drink."

The spoof, which performed at Bonnaroo last year – though it may have been more appropriate on Fun Fun Fun Fest's Yellow Stage – begins by auditioning audience members to play Arnold Schwarzenegger's Terminator role. Once they settle on someone who can say, "Come with me if you want to live," the existential battle between Skynet and the human resistance unfolds. All the while, expect to be blasted with Guns n' Roses' "You Could Be Mine" and other soundtrack classics.

And the chases, explosions, shootouts, and rematerializing liquid metal?

"Every special effect people think you can't do onstage – we do it ... for like $10!" chuckles Blake. "It involves a lot of aluminum foil."

Eddie Wilson won't disclose how much he made at last Saturday's auction, where the Armadillo World Headquarters founder and Threadgill's owner sold off a wealth of local music artifacts. Jim Franklin's painting of Freddie King and Leon Russell went for $29,000, the Armadillo's piano sold at $22,500 (to restaurateur Levi Goode), and a pair of marijuana leaf shit-kickers made for the original Vulcan Gas Company's co-owner, Don Hyde, by famous bootmaker Charlie Dunn were bid up to $7,000.

It's been five years since the Carper Family's meager beginnings as the Hole in the Wall's Monday happy-hour act. The pitch-perfect old-timey trio returns to the Drag dive for an anniversary gig on Wednesday, joined by the Governors and a Mike Harmier/Jonathan Terrell/Leo Rondeau song swap. Carper Family fiddler Beth Chrisman has teamed with country singer Roger Wallace to handle HITW's booking duties, replacing Tyler Hautala of Bridge Farmers, who recently left to manage the Hard Luck Lounge.