The Roost Crows at Midnight 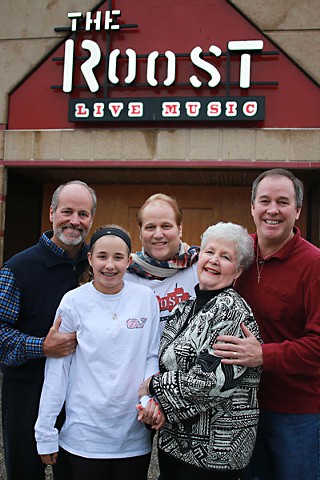 On a Wednesday night in early December, Eric Tessmer draws a sad half-dozen at the Roost. Two of the three bars at the fledgling North Austin venue are dark and still. The veteran local guitarist pours it on nonetheless for the meager audience, leaving them free to study the expansive poster collection lining the dark walls as he uncorks a barrage of post-Freddie King blues.

Tucked next to a prominent portrait of late local comedian Bill Hicks hangs a sign partially hidden between the bar and stage lights. Once it hung over the sidewalk on a prime block of real estate on Sixth Street. "Steamboat" was where Austin native David Cotton stumbled onto the dream that led him to this new wager. Pflugerville doesn't know what to make of the Roost just yet, despite a year of locals like Tessmer and frequent appearances by seasoned Texas troubadours on the order of Ray Wylie Hubbard and Joe Ely, the latter of who presided over the Roost's inaugural show New Year's Eve 2013.

"I have 30 years' experience in knowing what Austin people do, but North Austin is different," muses Cotton. "People in the suburbs have different tastes."

The owner, 55, got his start booking shows and running lights for Steamboat as a teenager, but the blues circuit of the Eighties doesn't exist anymore. Today, the hardest brew Cotton takes upstairs is a fancy root beer. In the old days, he might not have noticed an empty room.

"I had a pretty good little cocaine problem," he admits.

Lounging in a chair center stage, W.C. Clark turns 75 in a most appropriate manner: guitar in hand, a packed house at the mercy of his rhythm. Only he's not at the Saxon Pub or Austin's missing-in-action blues headquarters, Antone's. Couples whirl around in the strip of dance space in front of the Roost stage to his tender rendition of Al Green's "Let's Stay Together."

As the club begins to hum with energy, so does Cotton. In this town, his hospitality remains legendary. Coming of age as Steamboat's jack-of-all-trades – running lights, tending bar, booking acts – Cotton learned how to keep big roadshows like Joe Walsh happy (a full glass of vodka), while burning his candle at both ends on the two blocks between Steamboat and the queer scene on Fourth Street.

"I had boyfriends and girlfriends. I thought God had made me special," he says around a grin.

In the early Nineties, when Clark ruled the Austin blues scene, Cotton's cocaine habit and penchant for gulping the Eagles guitarist's preferred drink sent him spiraling into the least productive period of his life.

"I'm drinking half a bottle of vodka a day, putting on shows. I'm fat and toxic."

Trim and energetic, Cotton moves even faster three weeks later as the Roost hosts a young Okie folksinger greeted in these parts like a local hero.

"How many people have never been here before?"

Hands shoot up in response to the query from John Fullbright (revisit "Excitable Boy," Dec. 5). More than half the house hasn't, but they'll go anywhere to see the fresh-faced singer-songwriter drawing comparisons to John Prine and Townes Van Zandt. Asking an Austin crowd if they want a TVZ closer is unnecessary, and air rushes out of the room upon his opening strum to "Lungs."

Afterward, upstairs in his office as Fullbright signs CDs below, Cotton sips his root beer anxiously. He wants to catch Fullbright before it's too late. Not only does he want a copy of the disc, but there's an idea for a series of shows buzzing around in his head like a mosquito, distracting him.

In 1992, after four years of addiction, Cotton dried out in an Eastside rehab center. A meeting with longtime friend Bill Hicks helped kick-start his recovery. When the comedian died of pancreatic cancer two years later, Cotton was devastated.

"But I was sober. You know, my father [and Hicks] died pretty quick together. There's not many things that define you as when that kind of pain hits you. I'm so grateful I wasn't anesthetized."

He was also sober for another New Austin casualty: Steamboat's shuttering in 1999, when he says Bob Schneider made pancakes on the floor of a building that became trendy Sixth Street watering hole the Aquarium. They left the mixture, beaten into form by the crowd's kicks, for somebody else to deal with. Two days later, he was hired to book shows for the Saxon Pub, and over the next decade he hustled booking a network of venues, and forged the relationships that gave him a shot at finally opening his own club.

"The thought of Steamboat closing and not having a home was scary," Cotton says. "Thank God I was sober, but I was still frightened."

All of the Roost's investors are family – brothers Bobby, John, and Jimbo, along with their 77-year-old mother Janet, who doubles as the club's bookkeeper. The building's owners expressed reservations about a music venue for the space, but Cotton says a plea on his behalf from friend and weatherman Jim Spencer opened the lines of communication.

"It took us another year to get the lease signed. We got our liquor license on December 31 last year at 10am, and Joe Ely was sold out that night."

Finally, a haircut. For the last month, Cotton's looked less the part of club owner and more akin to scruff he'd have tossed out of Steamboat once upon a time. Cut neatly around his ears, with a fresh coat of reddish brown color, the styling makes him look 10 years younger.

"Joel was embarrassed to be seen with me," he explains with the same proud grin he gets whenever he talks about his partner of 11 years.

Scarf twisted around his neck, Cotton takes in his old stomping grounds. The corner of Sixth Street and Trinity, the spot Steamboat inhabited, now hosts Old School and collegiate bar crawl staple the Aquarium. Cotton's life flipped upside down when he found out his hideout was in jeopardy.

"Some kid grabbed one of the waitresses' behinds and [owner] Danny [Crooks] grabbed him by the back of the hair and kicked him out into the street," recalls Cotton. "'Get outta here, punk,' he said. And the kid says, 'You don't know who I am, do you? My parents own the Aquarium in San Antonio. We're going to come in and buy you out.'"

Pressing his face to the Aquarium's window, Cotton remembers drumming in all-star jams and attending to rock royalty. Through 17 years' worth of triumphs and slip-ups, Steamboat was there for Cotton.

"One night Joe King Carrasco played to eight people, and three months later he was on Saturday Night Live. Christopher Cross did his CD release party, and then eight Grammys. The T-Birds' record came out and they toured with the Stones. And then Stevie [Ray Vaughan] came out ....

Over a bowl of tortilla soup at Old School, which was once the Paradise Cafe, Cotton eyes the black-and-white promotional band stills on the wall with appreciation. Scrutinizing the Cold War Kids in a photo, he brainstorms show ideas for the Roost, a mental exercise to which he's prone.

"Amy Cook, Gina Chavez, Patrice Pike – we'll call it Girl Power. Is that too much? I like it, personally. I'd like to do one of those once a year, and I'd like to do one during Gay Pride, because not everybody from the 'burbs will go Downtown. I don't want to take away from Pride. I just want to do my own thing." 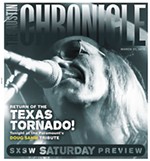 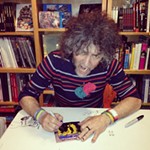