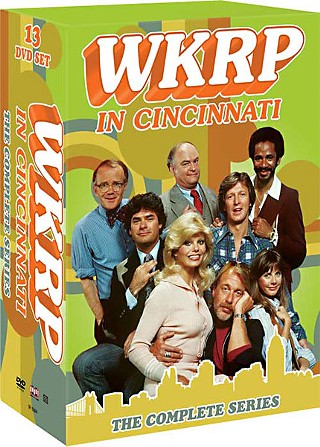 
"Baby, if you ever wondered/ Wondered whatever became of me/ I'm living on the air in Cincinnati/ Cincinnati WKRP." Missing only from WKRP in Cincinnati: The Complete Series, 86 half-hour episodes plus two extended plays on 13 DVDs, is a vignette on the scant bonus disc dedicated to the CBS sitcom's wistful theme song. That and the Beatles' bristling "Come Together," one of myriad song licensing issues that kept the show from digitizing in toto following an initial first season release in 2007. Completists bemoan a fake Fab Four and substitutions/exclusions, but clearances of Bob Dylan, Bob Marley, Bruce Springsteen – not to mention spins of "Layla," "Bitch," "Shattered" – moot any OCD soundtrack issues. Moreover, WKRP's literal wall of sound booms from the actual walls of the fictional radio station. From the iconic American Revolution poster of Kiss to hair waterfalls off Emmylou Harris and Nicolette Larson; spanning Lena Horne to Black Sabbath; plus a tidal New Wave – Devo, Pretenders, Suzi Quatro, and uncontested kings the Clash, whose promo campaigns for the four discs they released during the program's lifetime (1978-82) succeed one another inside and out of the deejay booth (in addition to the Strummer/Jones Rolling Stone cover in the hallway) – WKRP's record store decor could wallpaper the rock gods' Valhalla. Look for a trade ad from Aerosmith's Night in the Ruts (Right in the Nuts) on a bulletin board in the "bullpen" because it outlasts maybe every other piece of ephemera on the show. John Lennon, assassinated at the midway mark of the modest prime-time success, runs a close second the way his visage bobs into frame from out of the station's evolving mélange of eye-popping music memorabilia. Meanwhile, Dr. Johnny Fever (former San Francisco free-form jock Howard Hesseman) spins none of the hits, yet dishes pure soul (Stax, Motown) under a bed of Grateful Dead, Janis Joplin ("Mercedes Benz"), and this nugget: "Here's another powerhouse band from the Sixties. They're back, they're reformed, they've got a new record out. It's the Sir Douglas Quintet, Texas rock & roll!" Fever – the morning drive-time deejay with three or four T-shirts across four seasons and none so in dire need of contemporary merchandising than his purple "Black Death" number. Venus Flytrap (Tim Reid), real name Gordon Sims, Vietnam deserter and Quiet Storm lover man rolling vinyl while seducing another black beauty with candles and crab puffs. [In booming tone] Les Nessman! Four-time winner of the Buckeye News Hawk award, sporting a bandage in a new locale every single mother-loving episode because actor Richard Sanders gashed his head at the TV audition. Loni Anderson fits as snugly into the role of receptionist savant Jennifer Marlowe as anything Marilyn Monroe wears in Some Like It Hot, while Jan Smithers' Fever-smitten Bailey Quarters helps slam dunk the Dazed and Confused male fantasy theorem of being stranded in a Hollywood ensemble between bombshell glam and a diamond-cut girl-next-door (Gilligan's Island). That slots right in with Gary Sandy as the theme tune's prodigal programmer, a Matthew McConaughey of his era in beefcake jeans and Cinci tourism pectoral billboards. Like the late McLean Stevenson as Lt.-Col. Henry Blake in Mash, the also dearly departed Gordon Jump as WKRP station manager Arthur Carlson not only steals scenes out from under everyone, he does so with heartbreaking pathos inside deft comedic ham. Frank Bonner as sales manager Herb Tarlek in sofa upholstery sports jackets matches up similar to Ted Knight's triple threat on The Mary Tyler Moore Show: noxious butt of easy jokes, perpetual straight man, punch line knockout. Produced by Moore's company, WKRP in Cincinnati could be MTM's little brother: equally sweet and gentle with powerhouse belly laughs. A paucity of guests – Sparky Anderson, Hoyt Axton, Craig T. Nelson, Austin's Terry Kiser – means eight is enough for this basically theatrical troupe performing in front of a live studio audience that crackles at both topicality (fatalities at a Who concert in Cincinnati), and farce. A Thanksgiving promotion gone afowl [sic], Fever's Dr. Jekyll & Mr. Hyde disco dementia, even the nonsensical end song, all trend hilarity. Just as an MTM extra revealed the West Texan behind its theme (revisit "Love Is All Around," Oct. 15, 2004), a Sonny Curtis song famously covered by Joan Jett and Hüsker Dü, so too should WKRP in Cincinnati backstory its title song because you'll be singing it forever after. 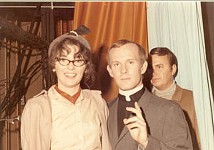 Improvising Every Second
The secret history of ACoT director Latifah Taormina, from Second City to the Committee and beyond