The mass of informal home recordings Bob Dylan cut with the Band in the spring and summer of 1967 remains one of rock & roll's most mythologized caches. The Basement Tapes' powerful mystique first manifested on the genre's bootleg breakout, 1969's The Great White Wonder, and given increasingly lavish iterations and official tidbits over the ensuing decades (Columbia's truncated, studio-doctored 1975 version doesn't count), why it's taken so long for a proper release is confounding. Now comes the payoff: a lavishly packaged 6-CD, 138-track Basement Tapes Complete, which adds 30 previously unheard tracks to the extant whole in you-are-there fidelity, and renders the boots obsolete. If there was ever any doubt, the music here spins commensurate with its legend, and though not originally intended for public consumption, these tracks comprise some of the most accomplished and compelling work Dylan and his compatriots ever produced. His retreat from public life following a 1966 motorcycle accident freed the 26-year-old singer-songwriter from audience expectations as well as his own history, so he dug through nearly every imaginable style of America's musical past – blues, folk, spirituals, country, pop – in search of inspiration. Dylan's uncanny chemistry with the not-yet-christened Band, whose instinctive rapport with their employer can shift mid-song from loose to possessed, accomplished the rest. The Basement Tapes Raw, a new double-disc sampler, offers a cheaper alternative to the mother lode, but this material plays most effectively when heard in its entirety. Tracks vary wildly in quality, from throwaways to unquestionable classics, but by presenting all known Dylan-led tracks in roughly chronological order with false starts, abrupt endings, between-song chatter, and multiple takes intact, the box grows stronger as it progresses from a series of tentative covers to a great American songbook. The inclusion of multiple takes is a major asset, allowing the listener to hear "You Ain't Goin' Nowhere" grow from stream-of-consciousness goof to winsome anthem, and tracing "I Shall Be Released," "Too Much of Nothing," and "Nothing Was Delivered" – none of which Dylan released officially – develop from ideas into some of his greatest compositions. And anyone slagging Dylan as a singer should hear him negotiate the emotional complexity of "Tears of Rage" through three distinct yet equally moving takes. Nearly a half-century after the sometimes haphazard creation, this music retains every bit of its intimacy, mystery, and resonance, and The Basement Tapes Complete boxes it up with the respect and insight it demands. 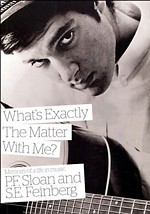 What's Exactly the Matter With Me?: Memoirs of a Life in Music
The man who gave us "Eve of Destruction" and "Secret Agent Man," then abruptly fell off the pop-culture radar