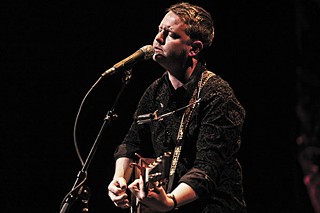 From the waist up: Fullbright at the Moody Theater Nov. 15 (Photo by Jana Birchum)

In 2009, the Folk Alliance International Conference took place in Memphis. The one name being whispered and hollered – John Fullbright. It was there that Greg Johnson, owner of the renowned Blue Door in Oklahoma City, took the singer-songwriter under his wing.

The native Sooner would then debut with Live at the Blue Door, since followed by From the Ground Up three years later, and May's Songs, whose "Happy" landed him on Letterman. On all three discs, Fullbright writes as if Woody Guthrie had discovered Townes Van Zandt. He's a Chisholm Trail storyteller, baring universal truths.

Like Okie standard Leon Russell, the flat, wide-open spaces of his home state distinguish Fullbright's craft. A month after Songs bowed to continued acclaim (From the Ground Up had already garnered a Grammy nomination), the Oklahoma Music Hall of Fame awarded the 28-year-old its Rising Star award.

This year in Kansas City, both Fullbright and myself showcased at Folk Alliance, sharing a bill on a Townes Van Zandt tribute (revisit "Folk Traumatic Stress Disorder," Feb. 25). Shows like this at the songwriters' gathering generally occur in the intimate setting of a hotel room, with attentive audiences the musicians can almost hear breathing between guitar strums. Fullbright performed "My Proud Mountain," I played "Kathleen." Greg Johnson beamed proudly the whole time.

"I first met Greg at a wake for Bob Childers at the Blue Door," says Fullbright, citing his state's Red Dirt music godfather, who died in 2008. "I was playing keyboard with another guy and I was giving Greg a really hard time. I was being a punk because that's how I used to have fun. I'd try to find that spot that's going to make somebody get really riled up, and Greg is the easiest target on Earth.

"At the time, I thought he was just playing along, but he wasn't. He just didn't like me. A year or so later, he was running a stage at the state fair next to my house and I played. I met him again and he asked if he could be involved with my career. I said sure."

At the Moody Theater opening for Patty Griffin last month, Fullbright kicked off the evening cracking jokes and serenading the audience with his songs on guitar. The sold-out house was his by the time he finished the 40-minute set on piano. He brought the house down with his version of Twenties blues staple "Ain't Nobody's Business."

"Being on all these shows with Patty at all of these theatres, and all those great pianos, has been incredible," acknowledged Fullbright before the show. "Then again, something like the Cactus Cafe, those super-intimate listening rooms, those are great too. Don't get me wrong."

Intimate actually describes Fullbright's rearing. The ample time and acreage of a farm in Bearden, Okla., provided him opportunity to explore whatever presented itself.

"I'd call it a hobby farm," he corrects. "It's more of a tax write-off than it is a working farm. But it's always been a farm, and it's been our farm for three generations.

"My mom had a pretty good record collection, but there was a piano in the house and nobody plays. So that was kinda my thing, to pass the time. I didn't have a Nintendo or anything, so I played the piano."

On my way to meet Fullbright for the ACL Live show, he texted that his plane was an hour late getting in from Alabama, where he had played the night before. Making my way Downtown later, I initially passed him on the sidewalk, leaning against the brick of the historic Schneider Bros. building that houses Lamberts, talking on his cell phone. Though the temperature had plummeted 40 degrees in 24 hours, he seemed unfazed by the cold. If you squinted, he could've been James Dean dressed in a tartan plaid jacket.

"I realized I was lazy and didn't want to get a job," he admitted. "I was in high school, I was 16 years old, and I really started playing. People started paying me to play and that was it. I actually had money in my hands for just playing songs. I'd play for four hours at a time and if I made $100 that was sweet. That was $25 an hour, you know? That's a pretty good paycheck.

"I don't think that now, $25 an hour is low to play music, but at the time I remember thinking that's where it's at."

Bearden's neighbor remains Okemah, where he first played the Woody Guthrie Folk Festival while still in high school. No Woody Guthrie joke gets past him all these years later. After that, Fullbright, who professes to be shy even though he's known for his humor and laid-back style live, only lists two songwriters when pressed about musical influences.

"Randy Newman," he says. "I've listened to a lot of him. When I write, I have a Warren Zevon filter in my head that all my lyrics go through now. I think, 'What would Zevon say about this?'"

"I noticed girls and I couldn't carry a piano around," he jokes. "I decided I need a leg up. My mom had an old guitar in her closet and told me she'd get it strung and someone to tune it if I got my grades up. So I did. I got straight A's for a semester. That was the end of my getting any good grades."

"From there, songwriting was natural. For me, it stems from not having anything to do. Being bored is a good thing for songs. I don't have a regimen. I walk around making up stupid rhymes about stuff and every once in a while it matures into something worthwhile, but it's very rare."

Fullbright heads into 2015 on a cruise with John Prine and Lucinda Williams. Manager Greg Johnson reports his star client doesn't write much on the road, thus much of the next year will be devoted to composing for the next album, plus sporadic tour dates and possibly a UK tour. Overall, Fullbright's content.

John Fullbright performs at the Roost on Friday, Dec. 5.