"The poet Robert Bly has written about the image of the Great Mother as a union of four force fields," says Jonathan Cott in conversation with Bob Dylan about his film Renaldo and Clara. He cites the "nurturing," "Death," "Ecstatic," and "Stone" mothers before noting, "Traces of these women seem to be in this film as well." In his anthology Back to a Shadow in the Night, the New York-based Cott – author of over 15 books, writer for The New Yorker and The New York Times, contributor to Rolling Stone since its inception – takes music criticism into deep territories, a lost art in a pop culture that expects its commentary to be short, uncomplicated, and produced on demand. His wide range of literary and musical knowledge comes into focus best when interviewing composers Harry Partch and John Adams, conductor Pierre Boulez and pianist Glenn Gould, or discussing the work of Edgard Varèse, Charles Ives, and Kurt Weill. Yet Cott's education allows him to informatively, rather than superficially, discuss Patti Smith in relation to Arthur Rimbaud, and quote Walt Whitman and Federico Garcia Lorca to former creative writing student Lou Reed without sounding pretentious. It's all in service of, to quote Cott's preface, "Man's expression of universal diversity." 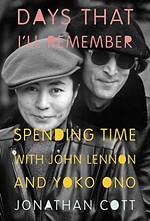