You can't keep the devil out of rock & roll. At least not in the case of heavy metal icon King Diamond. The 58-year-old Denmark native born Kim Bendix Petersen, who's called Dallas/Fort Worth home for the past 20 years, wasn't going to let a little thing like a triple bypass put an end to his long, colorful career.

Four years later, the singer's clawed his bloody way back for his first U.S. tour in over a decade. To mark the occasion properly, he's bringing his full European stage production for the first time since 1989's Conspiracy tour. Spanning the horror metal pioneer's three-decade career, from his days fronting Mercyful Fate up through 2007's Give Me Your Soul ... Please, King Diamond's headlining set Saturday night at Fun Fun Fun Fest promises an extravaganza like no other this weekend.

King Diamond: Oh, absolutely. It's going to be very exciting. The set is two stories and it's not just there to look at behind us. Plus all the things we will be bringing: Grandma, wheelchairs, the coffin trick from Conspiracy, the doctor and the priest onstage doing all these things. It's very visual, and also soundwise, I don't think we've ever sounded as good. It's gonna be special.

My voice is better than ever, which is rare for someone my age to say. It's easier to do now than it ever was. In December, my triple bypass will have been four years ago. I had to learn to breathe again. Each breath after an operation like that where they collapse your lungs is so painful, and a struggle. Then to learn to breathe and sing like I do again, to expand your lungs up to the capacity that they need to be, is a different technique now. And having stopped smoking has changed the clarity of the voice. Even when I started singing it was never that clear. It's an amazing thing.

AC: Sounds like you had to learn what was really important.

KD: What you also learn is: Don't take tomorrow for granted. And I don't – not anymore. I wasn't here for a while. I mean, the operation should've taken five and a half hours. It took seven and a half. Man, my body looked weird afterwards, like how they portray a decomposing body in a movie. My hands, my face, and my back were normal colored. The rest looked like I'd been beaten, like I started not being here. Which I wasn't.

That's some strange thought processes you go through. Because you suddenly face death in a whole different, very personal way. When you go into the operation you don't know if you're coming back out. You're practically saying goodbye for real. And then when you come out of it, just the way you come out – I came out too early – and the experiences I had ... is pure horror for a story. It'll fit into whatever the story will be for the next album that's for sure.

The band sounds better than ever, too. Also the set list is upgraded. There's a lot of cool stuff that we get around [to]. Practically all the albums. It's really unique and working in the right way, and I know that people are gonna have something they'll never forget.

KD: I really have high expectations for the next album. There's gonna be some very interesting stuff. I mean I have so many things for lyrics. Whenever it's time for an album, the box comes down and I look through all the stuff I've written over the years that's not been used yet.

AC: You have a new compilation coming out next week on Metal Blade, Dreams of Horror.

KD: It's a unique project, because Metal Blade has gotten licenses from Roadrunner. They're doing a real best-of that we should have had a long time ago. We were never involved in selecting songs for the best-ofs. It was always others that did it, over our head pretty much. This time Andy [LaRocque, guitarist] and I selected all the songs. It's a two-disc set; one is all the Roadrunner stuff and the other is Metal Blade stuff and it's all been enhanced. You're gonna hear "Welcome Home" with more power, but without changing the characteristic sound of it. And that goes for all of them. 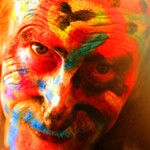 The Crazy World of Arthur Brown
The sometime Austinite tours the U.S. for the first time since 1969