Blurbing the second Friday of ACL 2014


After opening weekend one with his Western swing outfit Asleep at the Wheel, Ray Benson serves a second weekend with local stringers MilkDrive. The quartet, melding fiddle and mandolin-ripped roots with touches of jazz, contributed backing to Benson's second solo LP, January's A Little Piece. Expect a mix of Benson ballads and his baritone booming into MilkDrive's 2012 sophomore offering, Waves. – Doug Freeman


In the Eighties, the Preatures would've ruled radio. The Sydney quintet's guitar pop goes for the melodic jugular with twin axes and Izzi Manfredi's charismatic larynx. The band made a splash in March at SXSW with earworms "Better Than It Ever Could Be" and "Is This How You Feel?" The Jim Eno-produced Blue Planet Eyes waits on deck. – Michael Toland 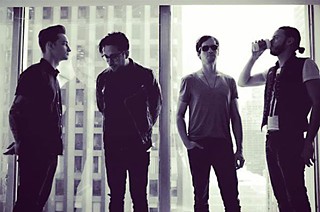 
Those wishing ACL had re-booked Coldplay can take solace in Saints of Valory. The Austin quartet boasts well-dressed members of international provenance and Top 40 traits including the soft-handed atmospherics of latter-day U2 and fence-swinging hooks of Fun. Atlantic Records released the group's third EP, V, in August. – Kevin Curtin


Formed in 2012, this UK quartet revives an exquisite strain of British psych-pop on its debut Sun Structures. Lead salvo "Shelter Song" gets dosed by an archetypal 12-string riff likely to summon a beatific sway. Their moonlit performance at Austin Psych Fest this spring was stiff in spots, but a summer on the festival circuit will have ironed out such bumps. – Greg Beets


After owning ACL's gospel tent for too many years to count, this Bay City family band has grown its flock far beyond state lines. They brought high-energy salvation to the front steps of New York's Lincoln Center this summer, and latest release The Spirit Speaks packs swinging arrangements that remind you where rock and soul music stem from. – Greg Beets


Robert Ellis knows that sometimes you need to leave to discover where you're from, and this year's The Lights From the Chemical Plant (New West), looks back on the Houston songwriter's move to Nashville. Ellis' third LP glows with memories from his Lone Star upbringing, while continuing to expand his eclectic take on Americana with touches of jazz, R&B, and pop melodicism behind his distinct nasal twang. – Doug Freeman


A slovenly simulation of Jerry Lee Lewis bangs on the piano less throughout Essential Tremors, the 2013 disc that shot this Baltimore Business into the national picture. Their grated, strained namesake still struts nonetheless. That's especially true in the live arena, where the wild foursome's prone to improvising. – Chase Hoffberger