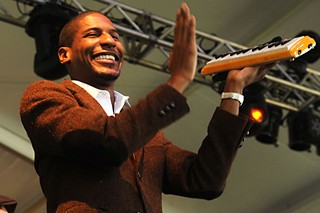 
Ever since moving to study music a decade ago, Jon Batiste has brought a little Big Easy to the Big Apple. The native Louisianan describes 2013 LP Social Music as genreless, but there's heavy doses of pop, traditional jazz, and Crescent City R&B. Batiste plays piano but grabs melodica when he leads Stay Human, as he often does, through city streets. He says the children's instrument has "a lot of unexploited possibilities" – apt metaphor for how he views the world.

Austin Chronicle: You often perform in unconventional spaces. Does that come from the New Orleans second-line tradition?

Jon Batiste: Definitely. It draws from the tradition. What is it that we have to inspire us? In the arts, to not draw from the great notions that have come before you is the biggest error you can make because you'll find that there's nothing new under the sun. What we're doing with the love riots and playing in unconventional places is taking from the early American tradition of marching bands.

AC: Do you think artists are too confined by the stage?

JB: I think the stage and the way of music over the years has taken the purity out of what it was originally. Now, every time anyone experiences music in a live capacity outside of the unique cultures of the world – New Orleans, Salvador da Bahia, different places in Africa – there's no interactivity. You have to be quiet. You have to wear a certain type of clothes in order to experience it.

Popular music is the most accessible music in a lot of ways because it's on the radio and always around us in everything we do, but there's still a divide. When do you get to talk with or experience up close and personal any of your favorite pop stars? They live on another planet. Everything is so distant. People need something that's an alternative to all of that.