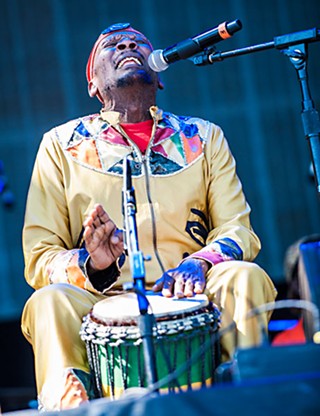 
Austin Chronicle: Your first recognition came in 1963 with the smooth love song "Hurricane Hattie." Where was Jamaican music in its progression at that time?

Jimmy Cliff: Jamaican music was a big commencing of formations. It was known as ska, later rocksteady, then reggae. When that song came out, Jamaica just got its independence from Britain and people were in a jovial, upbeat mood, which influenced the music.

AC: When reggae hit, the artistry became more righteous and spiritual. Was that an important step for the music culture?

JC: Yes, because people started questioning independence. Socially and economically, times were hard and getting harder. When Britain owned Jamaica, we had support, but independently, where does that support come from: tourism, ganja, rum? That's when the music slowed down to rocksteady. Then the questioning mind was still there, so reggae latched onto Marcus Garvey's African-rooted philosophy and Rastafari came into the picture. We found Haile Selassie and the Solomon lineage, so the music became more spiritual.

JC: In terms of spiritual path, my parents were Christian. I questioned that and threw that away. Then I became Rastafari, but I went to London and I couldn't continue with it. After that, I went into Islam and didn't find any answers. I do identify with Rastafari in terms of African roots and humanity's universal source of spirituality, but I don't lock myself into any one dogma.

AC: Continuing the lineage of Jamaican music, your participation in dancehall has been limited. How do you feel about that style?

JC: You see, dancehall is a rhythm, but the lyrical content has to do with physical things like sex, cars, and superstars. I don't care about that, but I did release a dancehall-styled "Rebel Rebel" on my last album and it had quite an impact in Jamaica, which felt good.