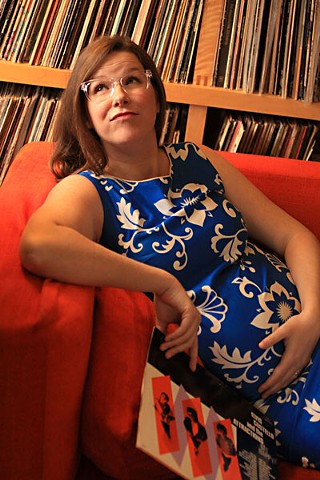 
After eight years as the firebrand of Ray Benson's Asleep at the Wheel, Elizabeth McQueen called it a day. It's a new normal for the singing-songwriting mother of two and her husband, the band's drummer Dave Sanger, all of whom toured the last five years as a family in a vehicle following the Western swing juggernaut across the country.

Austin Chronicle: When did you make the decision to leave the Wheel?

Elizabeth McQueen: It was a joint decision by me and the Wheel. I'd been thinking about it awhile. I knew I wanted [my daughter] Lisel to go to kindergarten, so I didn't want to stay on the road. It was just kind of time. I feel nice that everyone was in agreement about it. There was no bad blood.

December 31 was my last gig. True to form, our bus broke down. We had to get picked up and be driven six hours in a van. It was a New Year's Eve gig and New Year's gigs are always that way. It was the best last gig ever. I was sitting in a Mexican restaurant at 1am, eating chips and salsa in the middle of Utah with my good friends and my husband.

AC: What's it like to be home for so long?

EM: That's been an adjustment. Not traveling and not being with my partner. The travel I don't miss at all. Not being with my partner has taken some getting used to. For a long time we basically shared a brain. We had the same input all the time for the same things. You would say something and we would have the same thought about it. Now we have two separate things going on. He was just gone three weeks which is the longest he's been gone since I left the band. It was intense.