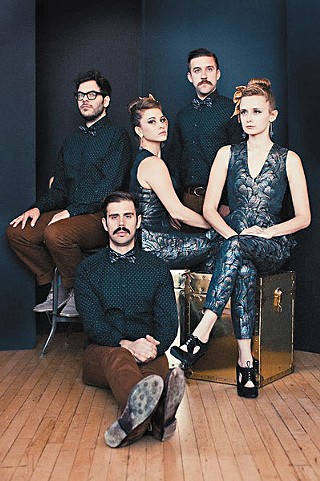 Dan Molad's going to call any minute, but his inquisitor's running late. Fortunately, the Lucius drummer is chill.

"I'm just lying in the back of a van right now," he drawls. "I wish I were in Austin, swimming in Barton Springs."

We hang up, but reconnecting 10 minutes later, he explains that he and his four bandmates are en route to Denver via Los Angeles, a 17-hour drive at the tail end of a globe-trotting summer tour in support of Wildewoman, the Brooklyn quintet's year-old indie-pop debut. By the time 2014 draws to a close, the band will have spent 300 days on the road.

"It's one of the least creative parts of [the whole process]," he sighs.

Such is the price of success. Wildewoman remains a revelation, the frisson of doo-wop/girl-group harmonies delivered by matchy-matchy frontwomen Jess Wolfe and Holly Laessig. The women are backed thunderously by Molad and guitarists Peter Lalish and Andrew Burri, who also dress alike and often look like purveyors of artisanal pickles, depending on how recently everyone has shaved. The energy from both the platter and the stage pulsates palpable and infectious. It's no mystery why the band's been in such high demand this year, starting in March at South by Southwest.

Where does that leave Molad's cherished dip in Barton Springs?