Interpol have been through both the heights and purgatory of critical scrutiny. 2002 debut Turn On the Bright Lights remains one of the marquee titles of New York's millennial indie-rock revolution, but 2010's self-titled fourth LP sounded like the band's death knell: calloused, angry, despicably gray.

"I think the past couple records were really reflective of the state of the band," admits drummer Sam Fogarino. "Those songs really exemplify where we were at. We weren't a band at that time. Now, we've got three guys who want to be in the room together. There's no discord."

Fogarino's referring to the departure of Carlos D, the longtime bassist who, whether the band liked it or not, served as its lasting visual image. His expensive suits and angular haircuts cast a shadow almost as long as "Obstacle 2." Now, with El Pintor, Interpol's out to prove its rejuvenation.

"[Carlos] isn't an issue. It's just like, 'Well, I'm not going to use that guitar anymore.' It'll just sound different, that's all," shrugs Fogarino. "He wasn't my lifeblood, he wasn't the band's lifeblood. We're moving on."

El Pintor sounds like a load off Interpol's shoulders, but that trademark duskiness remains, which is something Fogarino wouldn't mind confronting.

"I think there's some inkling of it on a couple tracks on the new record," he hints. "I'd like to someday make our Sandinista!" 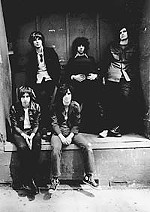 Take It or Leave It
The Strokes: the only band that matters