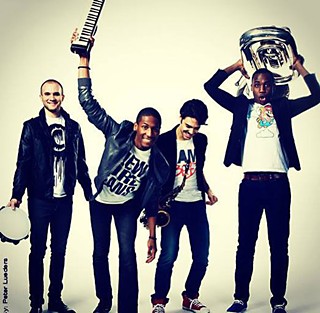 Grinning ear to ear becomes an involuntary reaction in the presence Jon Batiste. For the New Orleans keyboardist/multi-instrumentalist – the name Batiste rivals Neville and Marsalis as the city's leading musical clans – Social Music arrives as more than his new album. It's a mission statement.

"It's social and community-based," he says. "We want to create a sense of community wherever we go."

Born in the NOLA suburb of Kenner, Batiste came of age deep within a family musical legacy. One of the lead characters in Treme, the HBO series in which he had a recurring role, was based on a relative. He's lived in New York since enrolling at the Lincoln Center for the Performing Arts' Juilliard School 10 years ago, but his heart beats one rhythm only.

"[New Orleans] is so unique in that it's maintained that aesthetic for 100 years," he marvels. "There's no place like it in the world. It represents that free-to-be mentality, that American philosophy that everybody is welcome. It's one of the few places where music is still part of the culture and everyday life."

Batiste and his band Stay Human propagate the Crescent City's second-line tradition of taking music to the streets. They've recorded while crammed amongst commuters on subway cars and host "love riots," parading their music through the streets of their home base.

"Good music all has a backbone. If your music doesn't have a backbone and you don't stand for something that's actually authentic to who you are – that you live and die by – then it's not good music. It's not going to affect anybody."