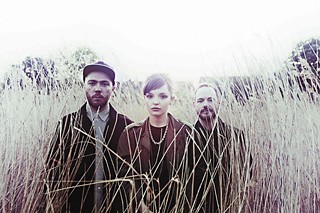 "That was when stuff really started going for us," points out Martin Doherty, the producer at the heart of Chvrches' steely, electrified sound. He's talking about South by Southwest 2013, when his Glaswegian trio roared through Austin and secured a deal on Virgin Records for full-length debut The Bones of What You Believe. The sheer vitality of its grooves hasn't abated.

"The first music I was interested in growing up was happy hardcore, rave," he says, reflecting on the crackling hooks of his instrumentals. "This was before the Internet, so there wasn't any peer-to-peer stuff going on. We were swapping rave tapes in school hallways."

The image of a young Doherty skulking around training school with his once dyed-black hair and admitted "emo phase" puts him in a league of electro auteurs like Jamie XX and Radiohead's Jonny Greenwood. The quiet one of the trio is also its lifeblood. The XX would be lost without Jamie's shuttering, monochromatic bass, much like how Chvrches relies on Doherty's blue-lightning calamity.

"I'm definitely a person who occupies himself with music on a daily basis," acknowledges he who received his first synthesizer at the age of 12. "If I'm not listening or discovering, I'm probably behind a computer making it. It's one of the ways I get through."

Chvrches
The Bones of What You Believe (Record Review)