Playback: HAAM's Time of the Season 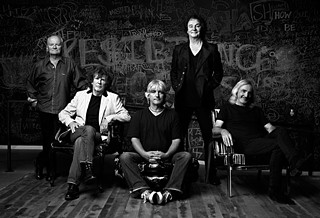 Rare are the entities in Austin music that transcend the subjective barriers of generation and clique to find universal respect. The Health Alliance for Austin Musicians is loved by all walks because it benefits all walks, be they concert pianists or death metal screamers. They even provide services to drummers.

"When we learned what the charity was, we just couldn't say no," says Rod Argent, sonic architect for the Zombies ("Time of the Season," "Tell Her No," "She's Not There"), who also jam for HAAM at the Belmont Tuesday evening. "Musicians, by nature, aren't the most ordered people in general. They live on the plane of wanting to get things right artistically, but are often not the best people to provide for themselves.

"And the job is not the most steady of incomes," he admits. "I've been very lucky, and I still don't know what my performing rights check will be until it comes through the door."

Last year's fund drive raked in $323,000 – one-third of HAAM's yearly operation costs. Each dollar raised equals $8 of services for HAAM's 2,000-plus members thanks to strategic partnerships with homegrown clinics. For local singer Wendy Colonna, among HAAM's first members and now co-producer of the Holiday HAAM Jam, the health care facilitator is both a comfort and a point of pride for Austin artists.

"I play with musicians all over the world, and no one has it as good as us in that respect," she says. "It's an incentive to be a musician in Austin and something that unites us because it's community supporting community."

"Austin hangs its hat on music, but we don't pay our musicians well," says HAAM Director Reenie Collins, reporting that 60% of Austin musicians earn under the federal poverty level. "One of our goals is to make people know that the musicians are the driving engine of what our city is all about."

"Sharing and friendship is the reason life has meaning," muses Monofonus Press founder Morgan Coy. "We have a fairly sustainable system where we can share people's work and build lasting relationships."

Austin's underground mixed-media publisher, operated by Coy, Cory Plump, and Will Slack, expands its music catalog this month with a handful of releases, including two on their new avant-jazz offshoot Astral Spirits. They're also collaborating on a 3-D found footage horror flick, hosting a stage at Kentucky's Cropped Out fest, assembling a vinyl compilation of Austin bands, and probably prepping a dozen other projects. Right now, they're waiting for the mailman.

"I have a tracking number!" Plump declares. "A record release show without a record is a fuckin' embarrassment."

Plump's awaiting pressings of a new LP by Spray Paint, a nervous-sounding minimalist punk trio for whom he plays guitar and sings (revisit "Urgent," Feb. 21). After releasing two records on California indie S.S. Records, Spray Paint brings it home to Monofonus with Clean Blood, Regular Acid. The label's catalog includes many such unique releases in its wide aesthetic.

Scanning the 90-something releases since 2007, you'll find music from disparate locals like Love Inks, Tim Kerr, and Survive, not to mention amazing internationals like Trans Upper Egypt and XYX, plus paperbacks like Thor Harris' devastatingly honest depression chronicles An Ocean of Despair, and film releases including the Sundance-approved Computer Chess, streaming now on Netflix. Roughly 20% of Monofonus' mail orders come from overseas, where they've folded in acts from England, France, Italy, and wherever the Rebel is from. That latter eccentric, also known as Ben Wallers of Country Teasers, releases his K ROT LP on Monofonus this week.

"They've treated me better than any label I've worked with," says Wallers. "They seem to be polymathical, because they have a good handle on all the important aspects of the thing. They kept bugging me for an album when I was absolutely not able to do anything except tie one of my shoes and just stare at the other shoe until it was bedtime again at last and I could just take the cunt off and go back to bed."

Monofonus flew Wallers to Austin in March, provided him with a metal shipping crate furnished with a futon and four-track to live and write in, forced him to play a South by Southwest show, and let him loose in a studio.

"Monofonus keeping me in that container where I could devote myself exclusively to recording was the happiest I've ever been in my life," he gushes.

• Tyler, the Creator has announced a December tour hitting San Antonio, but not Austin. The 23-year-old rapper does, however, have a date scheduled here in town – a pretrial conference on Tuesday for misdemeanor riot participation charges stemming from a SXSW Scoot Inn performance where he goaded fans to rush the gate. The Odd Futurist faces up to $4,000 in fines and one year in jail.

• Allen Harold "Sugar Bear" Black Jr., magnanimous emcee of Antone's, died Friday at the age of 64 after a long illness. No stranger to Austin's blues fans, his big voice and kind heart were integral to the soul of the nightclub for over 30 years. "He was so instrumental," reflected Susan Antone of the blues aficionado who was a respected friend to heroes like Bobby "Blue" Bland, Albert King, and, of course, Clifford Antone. A visitation will be held Friday, 6-8pm, at Cook-Walden Funeral Home with the funeral itself on Saturday, 11am, at Greater Mt. Zion Church.

• Manuel "Cowboy" Donley is still trying new things at age 87. The Tejano innovator, still blessed with rascally fretwork and advanced composition skills, debuts a new trio and never-before-heard songs at the Cactus Cafe next Thursday, Sept. 25, 8:30pm. This week, Donley heads to Washington, D.C., to perform at a ceremony for the National Endowment for the Arts, awarding him a Heritage Fellowship.

• Wild Bill & the Lost Knobs dominated last weekend's Music Video Race ceremony, winning five awards including Best Video for his collaboration with Asylum Art on "The Show." Early that morning, Bill and co-vocalist Amandalin survived a harrowing wreck that left them hanging upside-down in a crumpled sedan. The "Redneck Beck" releases debut LP The Show at ABGB on Saturday with Sweet Spirit.