Play Misty for Me 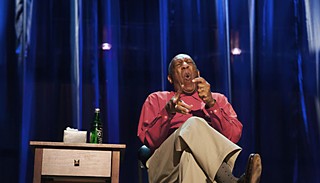 Since 2008, every time Bill Cosby flies into Austin – which thankfully is often – we get on the horn. Habit-forming, definitely. Previously, we spoke in advance of his debut at South by Southwest Comedy in March. This time, we talked jazz.

Austin Chronicle: I thought I was early!

AC: Last we spoke, you were coming to South by Southwest, and –.

BC: And you warned me!

BC: I thought you were there.

BC: So you know that crowd went crazy. They loved it. It was wonderful, and powerful, and then after I left, somebody went driving and hit people with the car. But I just enjoyed that moment. It was super-special.

AC: Did you get a feel for the enormity of the event?

BC: Yes I did, because see, I was just thinking about my participation, but then I realized.... First of all, I couldn't get a hotel room, so they put me up – I don't know what the name of the place was. Then, the traffic, getting from wherever I was to where I'm going to perform. It was then, once I was in the car, that somebody told me about the traffic. I said, "Well, we should have left about four hours ago." There we were, bumper to bumper. You know I'm very, very spoiled. I come into Austin, and I get off the plane, and I go to Bass [Concert Hall], and that's it. So now, I'm in a parade.

AC: I'm struck by the contrast of Bass, a very tony, acoustically perfect, three-tier theatre, and your SXSW venue, which was basically the backyard of a house!

BC: No, no, no. Look, for $60 a week, 1963, I played the Gaslight coffeehouse in Greenwich Village, from 8pm to 4am. I think the capacity was something like 118 people. The stage was just a platform they had built that was maybe six inches off the ground. It was actually a basement they converted into a coffeehouse, so right behind me was a kitchen. Even in the middle of a folksinger's ballad you'd hear [makes jet engine noise] the guy making froth. Then there were some nights, when somewhere around 3:30am – and the boss is still trying to make $1.50 off a frappé, or a liver-flavored drink or something – that I was talking to seven people.

I've been at state fairs where there's the stage and then the full width of a racetrack, which also serves as a tractor pull, and then the stands, so I'm at least 90 feet from the people I'm entertaining. And when the sun goes down, the Ferris wheel is going, and then the music from the other part of the fair. There's a place just outside Pittsburgh [laughs, slow and low], and I don't know what they do there, but the night I performed – and this is recently, within this year – came the thick odor that we were no longer outside, but inside a giant colon. And that was because the wind was blowing over the cattle and carrying it down to where we were. My response to the audience was, "Why is everyone acting like they didn't do it?" They laughed. I didn't have to talk for two minutes.

AC: Speaking of musicians, we did a piece on a local jazz guitarist, Jake Langley, who said you sat in on drums for a session he played [revisit "The Complete Jake Langley" on Earache!, March 28.] I didn’t know you played.

BC: Yes, and the reason is, I make more money talking.

AC: He said you're quite accomplished.

BC: Hey! What do you want me to do, hum some paradiddles? Have you ever heard Jake play?

BC: And so you know he's quite good, and plays with great intelligence. There, all I had to do was listen to him and be the drummer, with the rhythm. All I kept thinking about was just keeping it flowing, and listening to the bass player, and keeping it flowing. And that was it.

AC: Verve Records put out jazz jams under the banner of "Bill Cosby Presents," and you're well known as a jazz enthusiast. Did you get to play with genre notables? Did those drum skills land you in back-room jams?

BC: Okay, okay. He is dead. His name was Richard "Groove" Holmes. He played the organ and in the daytime he drove, I think, a sausage truck. He lived in Jersey, I believe. He had a hit, and it still is a great, great hit – Erroll Garner's "Misty." I was 16, and the drummer for him became ill. Someone came running up to the house; I'm living with my mother in a $5,000 house. "Hey man, you gotta come down to Mickey's Playhouse. Groove Holmes is there loading his organ in, and they don't have a drummer." So, I take my drums down. I got a $75 set of drums and a cymbal that just rings when you hit it – "ding, da-ding, ding, ding" [starts making a droning noise]. You understand? I don't have any money. The bass drum: leather heads. That's all I have! BUT, I want to play like Philly Joe Jones. And I want to be in Miles Davis' band with Philly Joe Jones, Paul Chambers, and Red Garland – John Coltrane. That's who I want to play with.

Now Richard "Groove" Holmes has a organ, and a saxophone player and guitar player. That's it. They play things like heavy blues. And it's a small bar, circular, and we're in the center. He played the first song, and I know what he wanted, but hey man, I'm 16 and I'm playing what I want to play. After that set ended, he said, "Look, thank you," and he gave me $16. He said, "You just leave [your drums] here. You go on home, and you can pick them up tomorrow." He made up an excuse that he had a bad hand and he was just going to play ballads the rest of the night. I said, "Okay," and went home. Later on, when I became famous, and he too was famous, he didn't remember me, but he remembered that night. That was a great feeling.

There was a benefit one time, for a new charter school in Harlem, the only one of its kind. This was decades ago. Dizzy Gillespie and Herbie Mann, and the drummer didn't show up. Well, doctor, you're talking about the moment. I went up there and they were already playing, so I sat down. Now Dizzy is a friend of mine, but he didn't know. And I started playing behind him, and his head turned around – shoom! He looked up and there I was playing and smiling. He did not smile back [laughs]. Nor did he say later on, "Listen, I didn't know you could play." Dizzy also had a problem with Elvin Jones. He didn't like that style.

AC: Did you put together bands?

AC: I'm wondering if you ever came across a jazz legend associated with Austin, trumpeter Kenny Dorham.

BC: Never met Kenny Dorham, but I heard Miles Davis use profanity as praise for his blowing Miles offstage. "Don't go up there when he's up there." That's how great he was.