In the local music scene, you rarely hear discussion of who's on a label and who isn't – because almost everyone isn't. Major label deal ... What's that? The nation's big three music sellers, Universal Music Group, Warner Music Group, and Sony Music Entertainment, bear almost zero influence in Austin's largely working-class bubble of musicians.

Of course our brightest stars are on majors: Willie Nelson releases via Sony's Legacy Recordings and Gary Clark Jr. remains the pride of Warner Bros. Records, while giants such as Spoon (Loma Vista) jumped on independent labels with major distribution. Meanwhile, we have ex-pats with major contracts, including Iron & Wine recording for Warner's Nonesuch and Kat Edmonson on Sony Music Masterworks, and you could fill a tour bus with formerly major locals like Ben Kweller, Trail of Dead, and Patty Griffin.

My heart goes out to Austin's corporate artists boasting modest local profiles in this land of indie reverence and hipster cred. Even this periodical stands guilty of rolling continuous ink on pasty indie acts while ignoring potential big-timers whose charming of major-label suits speaks to their hit potential and wider-than-average appeal. This week, "Playback" pulls its head out of the ass of the underground and pokes into the mainstream to sample our current crop of major-label talent.

The Wind and the Wave 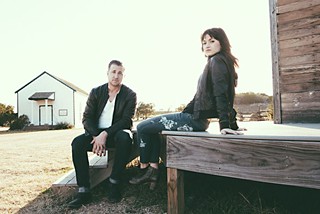 The Wind and the Wave

The acoustic duo of Dwight Baker and Patricia Lynn – he the wind, she the wave – craft country-influenced tunes for thirtysomething couples to listen to on road trips in their Volkswagen Golf. While employing the questionable practice of using a backing track onstage, their acoustic guitars, occasional mandolin, and Lynn's sweet tea voice amount to woody pop comparable to Shovels & Rope with the grit showered off. Their month-old debut includes the awesome single "With Your Two Hands," boasting swift resonator riffs and a breathless chorus including "shit" and "fuck."

Made-for-KLBJ modern rock lite led by Gavin Jasper, a vocal clone of Coldplay's Chris Martin right down to that vulnerable falsetto flip. Saints of Valory's keyboard-imbued, progressively drummed songs about love and heavy feelings buoy massive "whoa-oh" choruses made for a Super Bowl halftime show. The quartet, incepted in Jasper's native Brazil, relocated to Austin in 2010 and got its biggest break with a slot at Coachella last April. They've logged two EPs for Atlantic, both featuring the triumphantly self-involved single "Long Time Coming."

Demographic: U2, the Killers

The 22-year-old R&B polymath, who plays every instrument and produces his own work, was scooped up by a major last year after his home-recorded soul pop single "White Lies" became an online smash (revisit "After the Frost," Sept. 27, 2013). That relentlessly catchy song, released by Atlantic on his Low High Low EP, broke onto alternative charts and played in a Beats by Dre commercial. The sprightly voiced Austin native subsequently toured with Gary Clark Jr. and Fitz & the Tantrums, and collaborated with Wilco's Jeff Tweedy. No release date has been set for his debut LP.

Vibes in the Valley: Utopia Fest

A few hours southwest of Austin, down steep, winding roads, near the microscopic community of Utopia, is an open valley tucked into green hills where, every September, 2,000 friendly folks spend a couple days camping out and experiencing live music without fences. For the ancient Greeks, utopia meant "no place," fitting to these under-populated boonies, but mostly it connotes a perfect society. That works too.

"We made a pact to do something different than other music festivals," explains director Aaron Brown, whose Onion Creek Productions partnered with festival founder Travis Sutherland in 2009. They pondered a perfect festival and framed a philosophy around no lines, no overlapping music, free camping, capped attendance, and BYOB and food. "The bands you book are going to be the audience you bring. You book one band that brings an agro crowd and you can ruin the weekend for everyone. We try and pull the right vibe."

"I'd be there even if I wasn't playing," says Ghostland Observatory singer Aaron Behrens, whose Midnight Stroll tops a list of a dozen Austin acts playing Utopia. "At smaller festivals you feel so much more connected with the audience, the organizers, and the other artists. Everything is really symbiotic, and there's a focused energy and intent that shines though."

Though six counties separate the two locations, Utopia Fest remains very much an extension of Austin as many tire tracks trace back to the capital. An overloaded fall festival season, which includes two weekends of ACL, Housecore Horror, and Fun Fun Fun Fest in a five-week period, will soon tax the wallets and resolve of local music fans. Utopia Fest offers escape.

ALS Challenge or wet T-shirt contest? Same difference for the Yuppie Pricks, who donate $10 per wet boob during their album release show at Red 7 on Friday to the ALS Association. The would-be millionaire punks premiered their "Suck My Gold Dick" via sign-language interpreter in a video last week.

Balmorhea hit the Parish Sunday for their first hometown gig in a year. The alt-classical sextet, whose song "Bowsprit" can be heard weekly on recently renewed TV drama Rectify, look to the future and past with a 7-inch featuring two new slight, pastoral compositions as well as a reissue of the group's debut LP, both arriving on local label Western Vinyl next month. 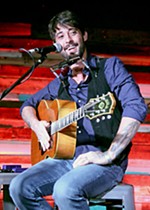