Friday, Mineral plays a warm-up gig under a pseudonym at a tiny Austin club. A week later, the locals kick off a national tour with three sold-out gigs at New York City's Bowery Ballroom. Later, it's the West Coast, then Fun Fun Fun Fest, Europe, and Japan. Breaking up for 17 years can do wonders for a band's draw.

"We used to be happy playing to 40 people," grins singer/guitarist Chris Simpson. 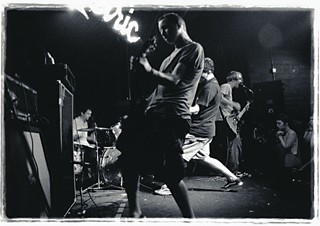 "Nobody loved that term," sighs Simpson. "It's not like the bands were giving each other high fives, 'Yeah, we're emo!'"

After breaking up in the fall of 1997, Simpson formed the Gloria Record with Gomez and later Zookeeper. Meanwhile, Mineral continued to affect emotionally in-touch teens, including Jimmy Eat World singer Jim Adkins, who proposed a reunion to celebrate both bands' 20th anniversaries during ACL Fest last year. That never panned out, but it got the ball rolling, an important feat considering that Simpson hadn't seen McCarver or Wiley for the better part of a decade despite living in the same town.

"At first, rehearsing was rough," admits Simpson, who had to watch grainy YouTube clips to relearn guitar parts he wrote a lifetime ago, especially the EndSerenading material because it was barely performed live. "But we immediately felt the connection, and we knew it was going to be fun."

Simpson's thankful to be in the latest seminal indie band revived by the reunion craze. It's given him a new appreciation for the things he took for granted as a young man: success, chemistry, and the power of songs.

"I've been surprised at how relevant it seems to me right now, because I didn't love the Mineral records during those 17 years. I had a general distaste for them because I wanted to distance myself and do something different," he concedes. "I'm more at peace with the legacy of Mineral now and interested in the opportunity to reconnect with it."

Look for Mineral to kick off the Labor Day weekend, playing under a song title from their first LP.

Sunday's International Overdose Awareness Day, marked locally with a meet-up at the Capitol's south steps, 5:30pm, offers families a forum to mourn and remember loved ones lost to drug-related deaths.

The musical family remains highly susceptible to ODs. The reaper has claimed Texas legends from Janis Joplin to DJ Screw, plus a lineup of local players including Quicks bassist Tracey Crossett, whose promising talents were cut short in 2004 at just 17; gifted blues harp player Gary Primich, who died in 2007; and Damon O'Banion, also in 2007, singer for Drunken Thunder, Dixie Waste, and High Divers. Those deaths weren't predestined. They were accidents that could've been prevented.

One of the local OD Day organizers, Charles Thibodeaux, accordionist in the Austin Cajun Aces and longtime volunteer in the harm reduction community, says the meeting isn't to guilt-trip drug users, but rather to educate them.

"Overdoses are preventable and there's basic information that can help. We tell people not to use alone because, if you overdose, there's no one there to help you. We instruct people to call 911 in case of an overdose, but if two people on parole are shooting up, they won't call 911 because the cops show up. It's like, 'Look man, call 911 and tell them you're with your friend who's overdosing on opiates. Now when you see the cops, haul ass. Save your own butt, but save your friend's butt too.'"

Along with demonstrations on rescue breathing, Thibodeaux says Sunday's event will teach users how to administer Narcan, an effective overdose antidote they advise opiate users to carry.

Johnny Morford, 21, who moved to Austin recently for the recovery scene – after years of a heroin-abusing lifestyle where ODs were a normal part of life – has written a song for the event called "Chasing Freedom." Now living in a sober house, he says it's humbling to share his experiences.

"My whole life I played selfishly with aspirations for big shows or a record deal. With this song, I'm trying to spread hope."

• With the summer heat still on full broil, a dip in the cool river sounds all right. Sunday's inaugural Float Fest at San Marcos' Cool River Ranch offers tubing, camping, and music from Grouplove, Portugal the Man, STRFKR, and Bun B, plus an undercard stocked with Austin artists including Wild Child, Run DMT, Zeale, Whiskey Shivers, and Roger Sellers.

• The Music Video Race runs through Austin Sept. 5-7, randomly matching local bands and filmmakers who then have 48 hours to make a music video. Top contestants take home a GoPro Hero3 camera and a day of recording at Good Danny's. MVR co-founder Tim Lillis says the goal is fostering collaboration between creative fields. "We see those scenes as two parallel lines, and our role is pinching those lines together, tangling them up." Registered participants include Magna Carda, Good Field, Soul Track Mind, the Able Sea, and Reservations. Interested musicians and filmmakers go to www.musicvideorace.com.