I Got More Soul! (Omnivore)


He never scored the hit that would've made him a household name, but Bobby Patterson remains way too good to be relegated a cult figure. The charismatic Dallas soul auteur recorded a pile of killer sides in the Sixties and Seventies, produced by the likes of Fontella Bass and Chuck Jackson; saw his compositions covered by Albert King, Jeff Tweedy, and the Fabulous Thunderbirds; flourished as record company A&R man; and put his ebullient personality to use as patter-spieling DJ on Dallas' KKDA. Despite misguided attempts at updating his sound beginning in the Nineties, I Got More Soul! boasts the comeback Patterson deserves. With Relatives and Black Joe Lewis brain Zach Ernst serving as co-producer, guitarist, and bandleader, the brisk 10-song set offers up spaciously funky grooves that stand aside from the old stuff. The insistent title tune launches the album on an appropriately brash note, showing off Patterson's voice and persona – equal parts O.G. swagger and Foghorn Leghorn bluster – as expressive and magnetic as ever. He unveils a convincing tender side on ballads "Let Me Heal It" and "I Feel the Same Way," and decisively reclaims "It's Hard to Get Back In" and "Everybody's Got a Little Devil in Their Soul," a pair of Seventies compositions he'd given other artists. The latter features the Relatives trading ironic call-and-response vocals with Patterson. Elsewhere, the singer brings abundant heart to unlikely covers of Sly Stone ("Poet") and the Dirtbombs ("Your Love Belongs Under a Rock"). I Got More Soul! comes littered with pithy verbal asides, references to old Patterson numbers, and the sort of flashy rhyming outbursts he regularly tossed out on his radio show. That barrage of self-affirmation reaches critical mass on the hilarious "Can You Feel Me?" and boils over on album-closer "The Entertainer, Pt. 1," whose subtitle suggests that, at 70, Patterson has plenty more to give. 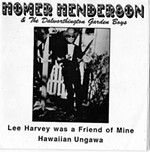