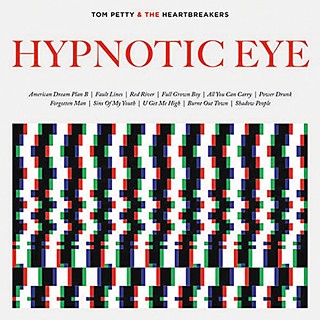 
Rock and Roll Hall of Famers have only their back catalogs to blame. The songs, sounds, and signifiers that crown them within the slave-to-youth genre become a millstone around the neck of every new album past those pulpy peak years. After said Valhalla, Nirvana, Laurel Canyon, all ensuing work tangles into decades of spot-the-antecedent Venn diagrams. Thirteenth Heartbreakers disc Hypnotic Eye can't compare to the Angelenos' first efforts as has been suggested, Beatlesque songs with Stonesian testes, nor do proclamations of the great garage band revival hold any water in the face of these native Floridians' mid-Seventies emergence from the swamps of Gainesville. Hyping Hypnotic Eye as the 200,000-mile sextet fishing through the glass bowl of a Black Keys party for a retooled ride amounts to calling them an American institution. Duh. Moreover, as crisply razor's edge as Tom Petty and the Heartbreakers (1976) and You're Gonna Get It! (1978) remain, they don't bottle the cohesion of the group's most recent efforts. Where 2010's Mojo rolled sticky Grateful Dead grooves (Live Anthology having covered "Friend of the Devil"), its follow-up now casts the stink Eye back to a diamond not in the rough, but still in stone: 1987's Let Me Up (I've Had Enough). Final Heartbreakers' disc before Petty pulled a Springsteen with his solo debut Full Moon Fever spinning off almost as many standards as Born in the U.S.A. – and thus ushering out the first group's golden era – its disheveled sneer a quarter-century later reveals an integral link in the chain. First single here, "American Dream Plan B," beyond telegraphing its side in the greater box of Petty 45s, shares a blunt down strum with Bob Dylan co-write "Jammin' Me," lead shot on Let Me Up (I've Had Enough). And all right, a chorus straight off Full Moon Fever. Closer "Shadow People," the longest and least compelling song on Hypnotic Eye, evinces faint echoes of Enough's "My Life/Your World." Between those bookends, beats deep cut Petty destined as a dark horse keeper in the canon. A Doors-like bossa nova aftershock, "Fault Lines" collapses Petty and co-pilot Mike Campbell's guitars into keymaster Benmont Tench's red-alert plink. The sultry croon of "Full Grown Boy" could be a Southern Accents ballad, and the deceptively simple refrain of "All You Can Carry" boasts one of its author's best absorptions of an every day expression. Anyone who's ever set foot in a bar will recognize "Power Drunk," with its dirigible lick floating over a pulsing, lumbering tempo. Straight-up hard blues, "Burnt Out Town" ("New emperor, same clothes ... Yes, and here I am, stealing gas with a garden hose") grinds right down to the bandleader's warning to "ah look out." No mistaking a credible LP cut ("Forgotten Man") for outright filler ("U Get Me High"), but then the album never pokes out its ocular nerve even when faltering ("Sins of My Youth"). Decades from now, Petty people will wonder at how a modest marvel like Hypnotic Eye aged into a late-career riff rocket.