Orange Is the New Weird 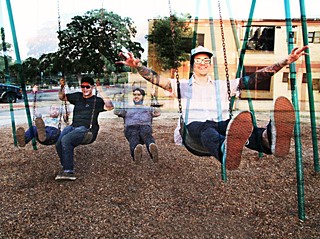 "I'll be the dork drinking beer," reads the text from Hans Zimmerman. Meant as identification before our meet-up at a local coffee shop, the message arrives as the first in a constant stream of self-deprecating cracks from the singer/guitarist/bandleader.

A better physical description of Zimmerman, whose band the Young releases its second Matador Records album this week, would mention dual, full-sleeve tattoos, and black, wide-frame glasses so thick he might be blind without them. Inked on his ankle in plain black is the word "pizza," while his forearms boast a vibrant mix of images, including a soft pretzel. It's 90 degrees on the patio, but every button on Zimmerman's pearl-snap shirt is fastened. His trucker hat reads, "Greyhound Hall of Fame: Abilene, Kansas."

Gifted with a colossal guitar ability that belies his unassuming disposition, the Young frontman shreds like labelmate Thurston Moore, although the two are physical antitheses. While the former Sonic Youth leader towers with cool confidence, the 5-foot-9 geek-chic Zimmerman dissimilarly refers to himself as a "weirdo," "mutant," and "solo freak" during our conversation.

The Young are signed to one of indie rock's most lauded labels, yet they're relatively unknown. Last month at the North Door, the foursome – Zimmerman, guitarist Kyle Edwards, bassist Lucas Wedow, and drummer Ryan Maloney – played to a quarter-full room in their hometown. The band's abundant talent and meager popularity are painfully incongruent. How do crowds react to the Young on tour?

Raised in the small Rio Grande Valley town of Laguna Vista, Zimmerman considered himself an outcast early on.

"In high school, I had dyed orange hair, and was into White Flag and Minor Threat," he recalls with a hint of pride.

Now 29, the guitar virtuoso, who considers himself a "hack," vividly remembers the day in fourth grade when his mother took him to buy his first guitar.

"I was small, testing out this giant acoustic guitar that was basically sliding off my lap," he reenacts, suddenly theatrical. "This long-haired metalhead dude walked in, and I remember watching him as he kicked his foot up on a stool and began shredding on this electric guitar.

"And he winked at me," smiles Zim­mer­man. "Immediately, I felt aligned with this mutant character."

Playing bass in bands throughout high school ("because everybody else played guitar"), he refocused on the six-string when he moved to Austin in 2003 to study studio art at UT. Three years later, he formed the Young. The band practiced in the back room of Sound on Sound, the since-closed North Loop record store owned by the group's former bassist Jason Costanzo.

Young guitarist Kyle Edwards describes the group leader as an "insane shredder," with a "mind-boggling" knack for his instrument. On an endless hunt to enhance his recordings and live shows, Zimmerman spends hours each week scouring for unique guitar gear online and in pawnshops. His guitar style is evocative of grunge greats like J Mascis, but the guitarist's true hero remains Greg Sage, of the defunct Portland punk band the Wipers.

"Greg's this weirdo character who I can totally align with," he relates. "He's as big on musical feeling as he is on guitar technicalities, which is important. Music should conjure some weird feeling in you."

After the Young's 2010 debut, Voyagers of Legend, flew under the radar on the Mexican Summer label, the quartet were unsure of their next move.

"Matador was the only label that even asked us to do anything," laughs Zimmer­man. "Which perhaps speaks to a broader picture of how weirdly obscure our band is."

Matador co-founder and Austinite Gerard Cosloy (revisit "Slanted & Enchanted," Jan. 22, 2010) was privy to the budding band early on. He included the group on Matador's Austin-themed compilation Casual Victim Pile, then shortly thereafter nudged his label cohorts to attend the group's show in Brooklyn.

"After the show, a friend there told me, 'A guy from Matador was at your show tonight!'" says Zimmerman. "I was like, 'What the fuck are you talking about?!' A few days later, we got an email from the label saying they wanted to make a record with us."

The Young are the only Austin act currently signed to Matador, both Shearwater and the now defunct Harlem having released their final product for the label that same year, 2010. Two years later, Dub Egg zeroed in on the band's defining riff-laden, stoner-rock sound. The LP wasn't wildly successful, nor did the band tour for great lengths in its support, but while Matador wasn't contractually obliged to release another Young album, they did.

"That they have the Matador 'seal of approval' is far less significant and not, I would argue, any sort of achievement," offers Cosloy. "The Young would be every bit as important a band if they were on a far smaller label, or no label at all – and no more interesting or important than if they were playing to half as many people as White Denim."

Most Matador artists, such as Kurt Vile, Pave­ment, Cat Power, and Interpol, established their popularity by playing festivals and touring for months at a time. Considering the Young's comparative obscurity, frequent touring seems like a no-brainer. Each band member, however, has a full-time job, and drummer Ryan Maloney is currently enrolled in college courses – commitments that challenge the availability required for sufficient travel.

"There should be a greater emphasis on touring," agrees Zimmerman. "I'd love to tour all the time, but we don't have the profile or command to do that right now."

With a master's degree in advertising, Zimmerman works at an ad agency as its art director. He used most of his allotted vacation days to record the band's new album, Chrome Cactus. Following its release on Tuesday, the quartet embarks on a quick, three-week nationwide tour. In a chicken-or-egg conundrum, the singer struggles to figure out how to finance a tour without requiring the steady income of a day job.

"What am I supposed to do," he poses, rhetorically, "start playing Vitamin Water shows or something? To live off making music would be nice, but that's never necessarily been the ambition of the band."

A dark, striking disc of reverbed, Dead Moon-type punk riffs, Zimmerman considers Chrome Cactus to be the Young's best work to date, so he doesn't overthink its upshot.

"Expectations are for parents to have of their kids," he jests.

If he let himself, Hans Zimmerman could someday be revered in the same guitar-god vein as the grunge greats. He's more similar to Greg Sage than he'll ever allow. Yet the professional-by-day/rocker-by-night has little interest in chasing acclaim. He likely will always view himself as the orange-haired mutant weirdo from the Valley.

"I make records for music nerds," he says. "They might not be immediately digestible, or maybe they'll exist for six months and then disappear ... If it all goes away after this album, I'm going to make more records even if no one is listening. I'm compelled to do it." 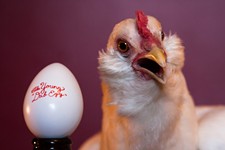 Playback
Dreaming up the Young, smokin' with Snoop