Everything Hits at Once

Spoon's other half, Jim Eno 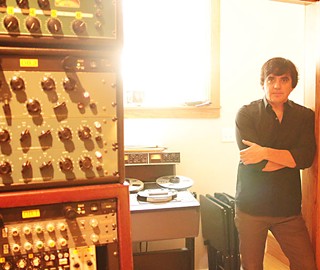 "I Saw the Light": Jim Eno at his Public Hi-Fi Studio in Tarrytown (photo by Todd V. Wolfson)

Jim Eno wanted to start a band with me once.

Last July, inside Mohawk after a set by Austin/Oxford act Frenchbraid – a project he recorded at his home studio – the Spoon drummer took interest in the following band, which had brought me there. He relished the fact that the singer makes my coffee at an area hang.

"Does he leave room for cream?" wondered Eno aloud.

Before he can muster his own rim shot, he's on it, repeating the phrase.

He looks around and grabs guitar buddy Zach Ernst. Seems we're a trio and I've got to learn bass.

Two months later, my prospective bandmate's onstage at Utopia Fest, lending percussion to !!! as they shake loose their headlining set. Eno produced the California dance sextet's 2013 breakout Thr!!!er at Public Hi-Fi. In jeans and a black rain jacket, the drummer bangs bongos for half the set, full smile unwavering.

"I'm not sure they'll let me play with them anymore," he says almost a year later back at his studio. "Too much fun. Think I might have worn out my welcome."

Touring ceased on Spoon's Transference in 2010, after which live performances continued at a trickle. Only two band sightings occurred in 2011, which doubled the following year. In 2013, for the first time in Eno's last two decades, Austin's most successful indie act didn't play a single show.

That's because Eno's co-pilot was otherwise occupied. Spoon's blond bard, Britt Daniel, was having Divine Fits, and who could blame him? By that juncture, the pair had been booked for 20 years.

Double-booked in Eno's case. Besides Spoon, the drummer/producer's adult life has been split between microchip design and the production and eventual release of countless collections of music for the next wave of independent talent. Now 48, he arrived from Houston in 1990 for a job with Compaq, worked there for two years before shipping here for good with Motorola. He met Daniel at a 1993 recording session and joined his band the Alien Beats directly. The pair then disbanded the Beats, flipped Daniel from bass to guitar, and started Spoon with two others.

Seven LPs and three EPs followed. The two most recent full-lengths, 2007's Ga Ga Ga Ga Ga and 2010's Transference, hit the Top 10. Certain songs – "Car Radio," "The Way We Get By," "I Turn My Camera On," "The Underdog" – became ubiquitous. There's been jet-setting, international tours, and all festivals. No one refutes the songwriting genius of Britt Daniel.

Jim Eno, meanwhile, continued to grind, working his day job before loading in for late sets at small local nightclubs. He married, had a daughter, divorced. The garage of a big house he bought in Tarrytown in 1998 became a one-room studio. Locals including Sally Crewe, Those Peabodys, Eliza Wren, and the Rite Flyers loaded in, while Spoon bore Girls Can Tell (2001), Kill the Moonlight (2002), and Gimme Fiction (2005) there.

Spoon tours scheduled around Eno's vacations and leave of absence policies. He considered quitting the tech sector, and remembered Reivers linchpin John Croslin saying, "It'll be black-and-white when that time comes." Eno's boss called him one day late in 2006 and told him he was folding his company, so producing full-time began immediately.

"We all needed a break," admits Eno today.

"I wasn't even thinking about how long or what I would do while Britt was busy," says Eno. "I had already booked four months of projects when he told me."

High ceilings, sunlight, comfy couches: The makeshift, one-room Public Hi-Fi has been replaced by a two-story, three-room compound built in 2006.

"That's earth and plaster in certain places," points out Eno. "It goes on the inside of straw-bale houses. If you look, there's no Sheetrock exposed. Sheetrock sounds pingy and high-end."

Public Hi-Fi has been built for recording comfort. Amps line the front room, synthesizers amass upstairs, and the entryway to the kitchen overlooks the cutting room. A floor-to-ceiling window separates the recording space and control room.

"I did a lot of research," nods my tour guide. "I wanted good sight lines. I wanted windows. Once you're in a studio for two weeks without windows, you realize how important they can be."

"You walk in the door, and 'Holy shit!'" exclaims Michael Lerner, the man behind Seattle's Telekinesis. "It's every plug-in that you have, in real-life form. It's so inviting. You're kind of blown away."

Lerner made his first trek to Eno's studio five years ago, after his band, signed to indie powerhouse Merge Records (longtime home to Spoon), played Mohawk.

"He was like: 'Do you want to come back to my studio and have a dance party?'" remembers Lerner.

Both of them and the band listened to Michael Jackson until 5am. Lerner returned to Austin three years later to record his third album, Dormarion, named after the street Eno lives on. This past winter, Austin's Dana Falconberry walked into Public Hi-Fi to record an album, her as-yet-unreleased fourth, and walked out with two singles, "Palmless" and "Seven Hills," that bore an entirely new, electronic aesthetic.

"I didn't know what to do with it," admits the indie rock singer of the former, a raw demo that's become a staple on KUTX. "Jim took it upon himself to take it in a direction I wouldn't have come up with naturally."

Eno then used the two tracks for a 12-inch release on Public Hi-Fi Records, a micro-label he founded last April so he could put out a Dupree session.

"I had the guys in there recording for my solo record," says Hammond B-3 organ grinder Mike Flanigin. "We had some time, so we decided to play. Jim ran a 2-track tape on the Dupree stuff – unbeknownst to me."

"He mixed everything on the fly," explains Flanigin. "With 2-track tape, that's all you get. He loved what we'd done, so he said, 'What about me starting a label and putting this out?' He said he wanted to start a label for things that wouldn't be heard otherwise."

In November, Eno followed Dupree with a release from Scandinavian singer Sondre Lerche.

"It's one thing to say that," adds Flanigin. "It's another to drop $12,000 on an unknown band that plays Sunday nights in Austin."

They Want My Soul

Life double-booked again for Eno toward the end of 2012. That's when Daniel, busy with Boeckner, rang.

"He was like: 'Hey, if the band wants to get together and work on anything, send it to me. Maybe I'll use it,'" says Eno.

With bassist Rob Pope busy in Brooklyn opening a bar, Dallas-bound guitarist Eric Harvey tripped down the highway into Public Hi-Fi to riff with Eno. The two came up with the framework for "Outlier," the sixth song on Spoon's eighth album, They Want My Soul, out Aug. 5 on Loma Vista, a newish L.A. imprint the band signed to after five LPs with Merge. The first Spoon song initially conceived without assistance from Daniel, the cut builds over a rushing beat.

Tracked largely in Buffalo under the guidance of Flaming Lips producer Dave Fridmann, the rest of They Want My Soul came together more traditionally. Daniel churned out material like the hit factory he is. The band – now with Divine Fits multi-instrumentalist Alex Fischel – bludgeon on "Rainy Taxi," experiment with synthesizers on "Outlier," and pop through the title track. "Let Me Be Mine" sounds like late-era Kill the Moonlight. Daniel says "New York Kiss" was actually written for Gimme Fiction.

"My girlfriend said, 'This [new album] combines the best elements of every Spoon record,'" offers Eno. "That's how I feel about it, too. It's got the toughness of 'Written in Reverse' and melancholy of 'Everything Hits at Once.' You have 'Rent I Pay' and 'Inside Out' – all these pieces – but it's bigger than that."

This week, Spoon sets off for Chicago to begin a 14-week tour of the U.S. and Europe, swinging through town for the Austin City Limits Music Festival in October before concluding Nov. 7 at the 02 Shepherd's Bush Empire in London. Another tour will likely follow. Daniel was adamant about his renewed energy for Spoon when we spoke in advance of last year's ACL Fest, repeatedly voicing his excitement about reconvening the group.

"[Jim] funded the Spoon operation a couple of times," emails Daniel when queried about his partner in the group. "First during A Series of Sneaks and then by getting his studio in the early 2000s. I don't know how we would have made Girls Can Tell or Kill the Moonlight otherwise.

"Jim's a great drummer who never forgets the basics of what really moves people," writes Daniel. "I've always admired how Jim's such a can-do guy. He decides he wants something or wants to do something or make something, and then he goes and does it." 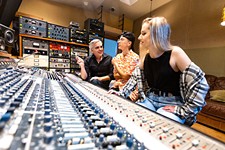