Playback: Smiling Your Way to Heaven 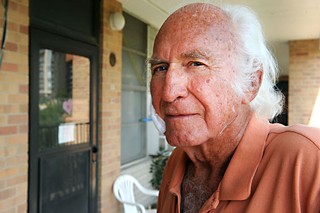 "The most important realization I ever had was that all I had to do to live in heaven on earth was to love everybody, and the way I could do that is smile. It works. You can smile your way into heaven."

Tommy Hancock beams a blissful grin in my direction.

"Even smile to people who don't merit it. If someone bad-vibes you, smile. It fucks them up!"

"I think being able to contact your own soul is one of the most important things in life," he tells me, perched peacefully in his Downtown apartment. "I can't hardly hear, I can't see very well. My mind doesn't work very good. I meditate to make up for it. Getting old would be a tough trip without it."

Hancock began as a fiddler in the Forties, working himself up to ownership of Lubbock's famed Cotton Club. There he served as house bandleader while impacting West Texas music culture by acting as a peacemaker between the warring tribes of cowboys and hippies in the Sixties. He experimented with LSD, moved his family into a primitive log cabin, and led his wife and five children in the Supernatural Family Band, which toured America in a school bus for a decade. Eventually he became a follower of guru Prem Rawat and wrote a high-minded book about dancing after gracing all manner of shows and venues in Austin for too many decades to count. During those same years, he became an avid letter writer to this publication.

Hancock has attended each of West Texas Muse's five sold-out showings and again on Sunday he'll be on hand to answer questions afterward. Take heed, however: The film may inspire you to gas up the school bus, trip out in an empty swimming pool, and move into the woods. Don't forget to smile. 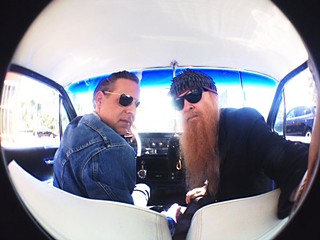 On November 1, 1981, young Mike Flanigin got a ticket to see the Rolling Stones, ZZ Top, and the Fabulous Thunderbirds at the Cotton Bowl in Dallas – his first concert. His older sister had to work, so her boyfriend defaulted the $17.50 stub to the 17-year-old military brat whose own musical aspirations hadn't yet budded. The seats were horrible, way in the back and behind a column, but that hardly mattered.

"Can you imagine being dropped into a ZZ Top show in 1981?" enthuses Flanigin. "That's as big as rock & roll gets."

Three decades later, the B3 organ wiz has collaborated with Thunderbird's leader Jimmie Vaughan, bought the Leslie speaker Ian McLagan used on that Stones' tour, and become friends with ZZ Top guitarist Billy Gibbons, who called on him last July.

"I told Flanigin to dust off the passport and get on a plane," recalls Gibbons. "Within 12 hours, he was in Switzerland in a black suit and continental tie, ready to bear down on the B3."

ZZ Top was playing at the Montreux Jazz Festival, a prestigious event standing on shaky ground after the festival's founder and manager of 45 years, Claude Nobs, died in January 2013.

"Claude's love for jazz and the sound of the B3 organ was no small part of Montreux, so we thought it apropos to dig down and play something genuinely jazz for the event," explains Gibbons.

On July 10, 2013, Flanigin waited nervously behind the curtain and flashed back to the Cotton Bowl while listening to ZZ Top play "Waitin' for the Bus" and "Jesus Just Left Chicago." Then Gibbons summoned him, along with local guitarist Van Wilks, to the stage to play Jimmy McGriff's "Kiko" and Freddie King's "I Love the Woman." In between, the band stepped back and Flanigin laid down a full-fisted jazz interlude while photos of Nobs were projected.

"There wasn't a dry eye in the house," remembers Gibbons. "And that includes me."

"To have my first performance with ZZ Top released on DVD is incredible," grins Flanigin, whose Dupree plays the Continental Club Gallery the last two Sundays in July. "I would have been happy with some cell phone footage." 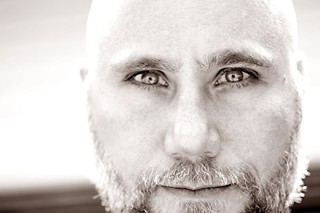 Having someone in your band who grows weed isn't as great as it sounds. Jake Mitchell kept time for the Boxing Lesson 2003-08, then served 45 months at a federal facility in Louisiana and six more in a halfway house after being convicted of manufacturing marijuana and conspiracy to manufacture marijuana. While in lockup, he built a hand drum using material from the camp's welding shop – lawnmower starter cable for tensioners – and played it once a week.

"I pined for the Boxing Lesson," admits Mitchell. "It was painful to have someone else in my seat while I was away. When I got out and saw them play, it was bittersweet. I was happy for my friends, but I knew it should've been me."

Around that time, 2013, Boxing Lesson founder Paul Waclawsky began writing music with longtime girlfriend Katey Gunn, who'd never been in a band. The couple's experimental rock echoed their record collection: the male/female interplay of Franco-freaks Gong and Krautrockers Amon Düül II, the tripped-out instrumentalism of Guru Guru, the spoken passages of Wire. The hallmark, for what would be known as Casual Strangers, became Gunn's equally charming and outlandish vocals.

"Katey is very forward-thinking about music," lauds Chris "Frenchie" Smith, who produced Casual Strangers' 10-song debut, out on Tuesday. "Instead of growing up onstage like everyone else, she's been in the corner taking notes. In the studio, she was so confident I just got out of the way and she nailed it."

"Casual Strangers is everything I've ever wanted," glows Mitchell. "I'm playing with my best friends, and we're all bringing ideas to the table."

"There's so many connections of friendship and love behind this band," agrees Waclawsky. "It was like everyone's journeys came together at one time."

› A rift between Austin Elks and the organization's national chapter over their property at 700 Dawson has resulted in the former renaming themselves the High Road on Dawson and utilizing the space as a music venue. Musical Director Tim Abbott says the building, which overlooks Downtown near the Palmer Events Center, will host several performances monthly, beginning Saturday with steel guitarist Rose Sinclair, 7pm, $10, with all profits going to local charities.

› The Dead Space will be the appetizer for a screening of Cannibal! The Musical on Tuesday at the North Door, kicking off the Brushy Street venue's monthly Troma night, where selections from the notorious B-movie producers are paired with bands as curated by Trailer Space Records. The local post-punk trio, whose heavy, grayscale tranquility triumphs on new LP Faker, hits the circular stage at 7:30pm. South Park maestro Trey Parker's seminal comedy runs immediately after.

› Hungry for Austin hip-hop? Head to the Scoot Inn on Saturday for the Chronicle Cookout. The free, all ages, backyard party showcases a diverse offering of spoken-vocal-locals including Riders Against the Storm, LNS Crew, Space Camp Death Squad, Dat Boy Supa, and Sip Sip. 5pm-12mid. 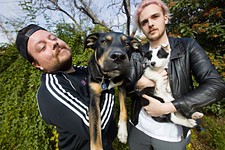 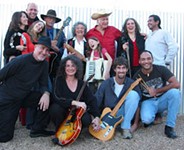 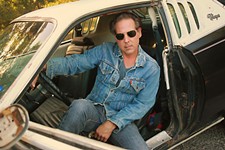 The Drifter
Ever lift a Hammond B-3 organ? Mike Flanigin levitates it. 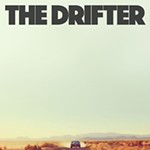