See that tip jar? Give. 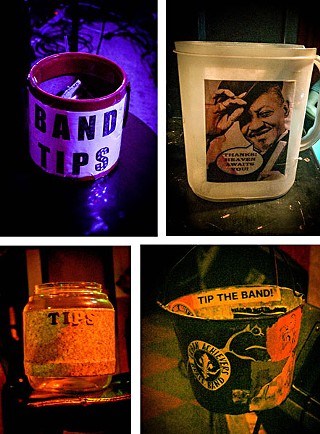 Be it a pickle jar, metal bucket, or empty beer pitcher, most live music venues around town have a receptacle near the stage where patrons can drop bills for the benefit of musicians. Tip jars either supplement the payment artists receive from the club, or, in some cases, represent the entire earnings of that performance. A good spiel can stimulate gratuity.

"Your applause is like butter, now how about some bread."

A bad one won't bring the dough: "This is our bandmate Phil ... Phillip the bucket."

Two weeks ago, we caught wind that blues singer Mac McIntosh was allegedly reprimanded by a manager at Moontower Saloon for walking into the audience to collect tips.

"They want you to leave the tip bucket onstage and make an announcement," McIntosh told the Chronicle's Chase Hoffberger. "But if people are sitting a good ways away from the stage, they're never going to get up and put the tip in.

"It's Thursday night, there are a number of people there, and the bar's not paying an exorbitant amount to the band," continues the African-American veteran vocalist, who frequently sits in with the Little Elmore Reed Band. "The tips are what makes the difference. I'd go so far as to say that [walking the bucket] is the Austin way."

Moontower manager Jake Lynch says the business has no specific policy regarding musician tip jars and that when he's managing, performers can accept gratuity in any manner. In my own nightly practice of taking in live music, I've observed the contagiousness of tipping. The container sits seemingly unnoticed song after song until one patron approaches the stage and deposits cash, then several others follow. Monkey see, monkey do. I've also noticed that it's almost invariably a gal who's compelled to pick up a tip jar and walk it amongst the crowd.

"It's a maternal action from someone who's friends with musicians or may have been married to a musician and knows how helpful it is, because people don't want to walk up to the stage – there's a psychic barrier," explains Texas Tycoons leader Paul Minor. "It's an art, and some women I know are on some next-level tip jar passing."

Minor, who notes that a successful tip jar should be transparent, labeled largely so it can be read from the back of the room, and emptied when full, says that a tip walk often multiplies gratuity tenfold. Yet, if the walker looks too imposing or hints at disruption, it can be off-putting. Organ ace Mike Flanigin, whom I watched accrue steady onstage tippage during his regular weekend gig at the Continental Club Gallery on Saturday, doesn't appreciate anyone forcing the tip jar on his audience, because they already paid $5 a head to get in. He prefers having a cover charge over a free, tip jar gig.

"I don't want to tell my kids that daddy's just playing for tips," he says. "The only thing separating that from panhandling is some walls. A tip should be a way to say, 'I appreciate your music so much here's something extra.'"

How much is an appropriate tip?

"At least the same amount you paid for parking," answers Guy Forsyth, calling in from tour with his Hot Nut Riveters, who'd just had $20 bills laid in front of each member by a tipper in New York.

Forsyth once lived off gratuity as a renaissance fair stuntman, street performer, and musician at tip-only venues like Joe's Generic. When he became financially solvent in music, he walked into Joe's and dropped $100 in the jar.

"If someone affects me, I want to complete the circuit," he reasons.

Forsyth could teach a master class in soliciting tips: "Don't be afraid to engage the audience, don't be rude or belabor the issue, and give them your spiel right after the hottest part of your set."

While everyone knows the plight of waitresses, fewer understand the low earnings musicians stand to make.

"Music is under-monetized. It just is," maintains Forsyth. "But you can make a big difference in a musician's week if you put down a $10 tip." "Every song on Born in the U.S.A. is a brilliant piece of working-class poetry," praises Johnny Walker, who channels Bruce Springsteen on Friday, fronting the E. Sixth Street Band as they perform the classic album at Hotel Vegas' Fourth of July spectacular. The former Ignorance Park singer remains Austin's king of one-off tributes, having fronted versions of the Who, Talking Heads, Ramones, Butthole Surfers, Rolling Stones, Pulp, X, and the Stooges. He doesn't impersonate other singers. He captures their spirit. With Springsteen, he figures, it's a matter of finding the right amount of guts and not becoming a caricature. Vegas' hoot night, also featuring tributes to Cheap Trick, Billy Squire, the Beach Boys, and the Gories, will be Walker's last local performance for a spell as he's moving to (wait for it) New Jersey.

› Willie Nelson got high ... on the charts. Band of Brothers, the Texas icon's first LP of predominantly original material since 1996's Spirit, debuted in the top position on Billboard's Country chart and at No. 5 overall. Nelson wrote nine of the album's 14 tracks, which otherwise include a duet with outlaw acolyte Jamey Johnson on Billy Joe Shaver's "The Git Go" and a beautifully weary cover of Vince Gill's "Whenever You Come Around."

› Once More 'Round the Sun, the latest album from Atlanta metal giants Mastodon, includes a cameo from local growler (and bandmate of yours truly) Gary Lindsey. The former Assjack frontman and leader of Black Eyed Vermillion, who sang in Brent Hinds and Troy Sanders' pre-Mastodon, experimental metal outfit Four Hour Fogger, lends a high grind chorus to the proggy "Aunt Lisa." The vocals were tracked locally at Million Dollar Sound by Kurtis D. Machler.

› Deadline extended: On March 27, City Council passed a resolution directing the city manager to report the South by Southwest evaluation results and any proposed code changes within 90 days. On Monday, Austin Center for Events head Bill Manno told "Playback," "We have sent a memo to the mayor and Council requesting a 30-day extension. However, we are diligently striving to complete it sooner."

› Speaking of SXSW: Beginning July 8, the Festival is accepting applications from performers at www.sxsw.com/music/shows/apply. SXSW Music takes place March 17-22, 2015. Materials are due by Oct. 10, with early fees equalling $33, and $45 for applications submitted after Sept. 12.

› Bruce Bowland, the swaggering vocalist of short-lived but influential hard rockers Krackerjack, who packed Austin's New Orleans Club in the early Seventies and employed Stevie Ray Vaughan as a lead guitarist, died on June 12 at his home in Dallas. "With his stage presence and the way he danced, he just looked like a rock star," remembered bassist Tommy Shannon. "And I loved the way he sang."

› Tejano innovator Manuel "Cowboy" Donley landed a Heritage Fellowship from the National Endowment of the Arts, an honor which nets the 86-year-old singer $25,000. A living treasure of Austin's Eastside, whose career began in the Forties, Donley was among the first Latinos to lead a rock & roll band in Central Texas and helped shape Tejano music's identity by adding sophisticated orchestral arrangements to popular Latin styles like bolero and ranchera with his group Las Estrellas.

› British pop star Phil Collins will donate over 200 Alamo artifacts to the battle's historical site in San Antonio. The onetime Genesis drummer-turned-frontman evidently owns the world's largest private collection of Alamo-related remnants, which includes Davy Crockett's rifle shot pouch and powder horns. Laura Hubbard of the Bullock Texas State History Museum says it's quite possible that the artifacts will someday be displayed in Austin, as they've been lent a number of Alamo items in the past.