Ian McLagan got that mojo working

Legendary keyboardist Ian McLagan, whose credentials include a Rock & Roll Hall of Fame induction with the Faces, sideman gigs with Bob Dylan and the Rolling Stones, and recording with Chuck Berry, just released his eighth studio album, United States, on credible indie label Yep Roc. A smooth, soulful sequence of old-school rock with stirring Hammond B3 leads, United States may be the British-born rocker's coolest release this century. His knack for writing a great love song proves unyielding.

United States' most touching moment comes on the devoted pop tune "Love Letter," which finds Mac painting pictures and writing messages of adoration for his wife, Kim, though he can't find her to deliver them. Kim McLagan, an iconic British model and ex-wife of Who drummer Keith Moon, died in a car accident in 2006.

Thematically, "United States" refers not to McLagan's adopted homeland – he's been a Travis County resident for two decades – but rather the varying states of union.

"It's all about sex and relationships," Mac reveals by phone earlier this week. "That's why there's a motel on the cover. It's a bit of a suggestion."

Where does that leave his love life?

"I've been dating since a couple of years after Kim died, but it hasn't worked out," the jolly, diminutive keyboardist admits. "The last time I dated was 33 years before she died –when I dated her! So I don't have the ... the ..."

You say you don't have the "game"?

"Yes! There's no such thing with me anymore! My eyes are 18, my body's 69. I can't trust my eyes because I just latch on to someone who's 35 or something ridiculous. This one girl tried to turn me on to Kanye West. I said 'I think this evening's over.' It's hopeless at my age. I've given up."

Instead of chasing young women, Mac often spends his days clearing fallen trees off the 10 acres of trails that run behind his estate in East Travis County. Just imagine: a British rock star brandishing a hacksaw while riding a lawnmower through the sticks.

"I'm dangerous to everybody," he jokes.

Next month Mac hustles overseas for a European tour with his Bump Band – a quartet that includes locals Conrad Choucroun, Jon Notarthomas, and guitarist "Scrappy" Jud Newcomb. Next year, he says he fully expects to be engaged in the long-rumored Faces reunion tour complete with band frontman Rod Stewart. 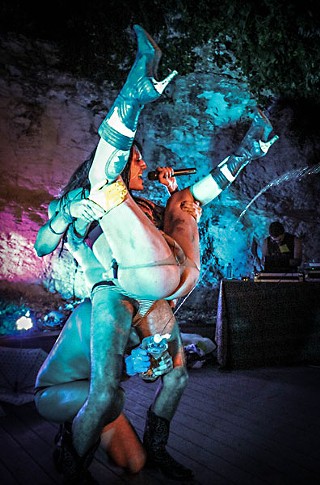 "We will be touring next year, and I'm very excited," McLagan confirms. "The fact is we always wanted Rod to do it. Every single time we asked him, it didn't work. This time, he wants to do it. So I hope and pray nothing happens between now and then, because it would be great."

You can catch McLagan & the Bump Band at Waterloo Records on Tuesday, June 24. Two days later, the crew celebrates 10 years of their weekly residency, held at the Lucky Lounge every Thursday Mac's in town.

Days are numbered for the Legendary White Swan, the modern incarnation of the historically black venue that's catered to drinkers and music fans alike since first opening on 12th Street in the Sixties. Bar owner Randall Stockton confirmed to the Chronicle Friday that he plans to shut down his dimly lit Eastside music lounge July 21 (See "Giving Up the Swan," Earache, June 14), leaving two silver linings in the distance. First is that the space will remain in operation and stay within the family, regenerating under Stockton's half-brother Billy Hankey as the King Bee Lounge. Second, Hankey plans to retain the Little Elmore Reed Blues Band and their longstanding Monday night residency.

Stockton bought the venue after a brief closure in 2011 and immediately inserted new music programming into the space, welcoming bands to the hardscrabble 12th and Chicon strip upwards of five nights a week. The venue was host to the bedlam farewell show of Austin punks the Chumps in 2013 and brought in ultra-underground crust acts via Pirate Punx. It also worked as an outpost in last year's largely African-American Eastside Kings Festival, set to run again in September.

Stockton cites a lack of attendance as primary reason for the sale.

"I had hoped that it would be a good hangout for both the existing community and the new people moving into the neighborhood," he says. "That's the part that makes me sad. I didn't successfully pull that off."

Before the bird flies, get on down there for a beer and some good times. Otherwise, you won't know what you missed out on.

› Austin blues aficionado Eddie Stout heads to Japan this week with local engineer Lars Göransson to produce an album with 76-year-old, Louis Armstrong-endorsed vocalist Jewel Brown. While her name can be found on some ancient 45s, this upcoming Dialtone Records release will be the first solo full-length of Brown's seven-decade career. Two of the tracks, set to be cut with Japanese blues band Bloodest Saxophone, come written by Texas harmonica phenom Ted Roddy.

› Austin's Urban Renewal Board extended the licensing agreement on Kenny Dorham's Backyard Monday, ensuring that the city-owned space on East 11th Street, currently run by Harold McMillan's DiverseArts Culture Works, would remain in operation until September 30. KDB had been threatened with a shorter lease last time it met before the URB for renewal in September 2013. For more details, see Chase Hoffberger's report on p.14.

› Prodigiously trashy sewer rap diva Christeene delighted a packed house at Cheer Up Charlie's on Saturday with a hilarious and disturbing performance. Utilizing a clever stage effect to illustrate the ballad "Tears From My Pussy," one backup dancer suspended the local skank in birthing position, while another sprayed the audience with a water bottle held between her legs. Christeene and her Boyz set off to Europe this week for a 10-date tour in which they promise to "represent Austin in the worst way."

› Singer-songwriter Suzanna Choffel has joined Spanish Gold as keyboardist and backup singer for the remainder of the trio's national tour. The supergroup, which features My Morning Jacket drummer Patrick Hallahan, ex-Hacienda guitarist Dante Schwebel, and Brownout guitarist Adrian Quesada, has spent the early summer on a tear following the release of debut LP South of Nowhere.

Every year on June 21, musicians in hundreds of cities around the world take to the streets to celebrate the summer solstice with a series of participatory music events. It's a phenomenon built around the idea that the year's longest day should be one of creativity. I was in France when I first witnessed the wonder in 2005, and music filled every cafe, bandstand, and street corner. It was like SXSW without wristbands or ambition. Austin has yet to adopt the 32-year tradition – until now.

Matt Ford, director of locally headquartered start-up Solstice, devised a way to incorporate his company's technology platform into an Austin iteration of the worldwide music event. Via his website, venues and artists were able to sign up to participate throughout the day, listing their respective style preferences and times of availability. Just like online dating, when a band and a venue approved of one another, they posted to each other's schedules.

Ford says he aligned 53 venues with 150 performers, with show spaces ranging from the traditional – clubs and restaurants – to the slightly more off-kilter spots like grocery stores and houses. Rainey Street represents the most concentrated area, with nine venues, while the Rosewood/East 11th Street corridor also features a heavy congestion between Trailer Space Records and the Victory Grill. The free performances, which run from 10am until 2am, range from rap shows to singer-songwriter showcases to group harmonica lessons. Navigate the commotion with the easy to use Solstice Music Celebration smartphone app and visit www.onesolstice.com for more details.