An imposing presence in Texas' rock & roll underground, Orville Bateman Neeley III has made his name as a vocalist, producer, and instrumental polymath, clocking time in Bad Sports, the Best, and A Giant Dog. He's at his most commanding fronting the powerhouse crunch of his namesake band, OBN III's. Today, he stands as that gang's last original member, having swapped Graham Low, Andrew Cashen, and Jason Smith for bassist Michael Goodwin, lead guitarist Tom Triplett, and Marley Jones on drums. In turn, Neeley's assumed rhythm guitar responsibilities. Things are changing. If the outfit's recently released LP Third Time to Harm is any indication, they're changing for the better.

Austin Chronicle: Are you ready to be tethered to a guitar amp and not free to run around the crowd when the OBN III's play?

Orville Bateman Neeley: I've wanted that since I started the band so I can play the riffs I write and work on my chops every time we go on the road. There's an essence lost when you hand someone else your riff. In terms of my health, I've narrowly avoided serious injury many times because people in the crowd don't understand I'm not there to wrestle them. Every night of the last tour, someone would end up choking me out or dragging me by my throat. I can't sing when someone has their arm around my throat.

AC: Could you itemize your battle scars for us?

OBN: I've gotten my teeth chipped from people who think it's okay to slam shit in my face and tackle me. I've stepped on a lot of broken glass. I've been air punching and caught a nail in my fist from the ceiling. I've bruised the fuck out of my knees, and will probably have really bad knees in 20 years.

AC: Are you concerned about the musical energy downshifting with the new lineup?

OBN: That's the main thing I wanted to focus on. It's changing, but I don't think it'll be any less. It'll be tighter. There were things I wanted beyond downstroke power chords all the time.

OBN: I've always wanted this to be a hard rock band, but it was easy to lump us into the garage punk thing. Like I've said many times before, we were only a garage band because we practiced in the garage. We had simpler songs at the time, but I was also appealing to the players in the band whose attention spans were short. I think bands should change.

OBN: A lot of parts of my life are really slow, boring, and lonely, actually. "No Time for the Blues" is basically me saying that I have nothing to complain about. Anytime I catch myself getting down about things, I remind myself I don't have time to be upset. I just need to keep doing stuff. With "The Rockin Spins," I didn't know what I had taken. In retrospect, I think it was meth. It was the weirdest feeling. I was lying in bed in a hotel and I felt like I was spinning and clicking like a ratchet. The lyrics pretty much came to me right then. I sat on the balcony walkway of this hotel in Virginia Beach. It was 6am and people were getting up to play golf and being really startled when they saw me looking like shit and playing guitar.

AC: What do you want people to know about the OBN III's?

OBN: It's not the same band. It's not the same show. We have a lot of new material and we're not going to be playing any of the old shit. That might hurt some people's feelings, and we'll get requests for old stuff that, frankly, I'm really tired of playing. But what am I gonna do? Sit on this for a while and wait for you to be ready for it? I don't think so.

Vinyl copies of Third Time to Harm arrive at Trailer Space Records and End of an Ear next Tuesday. The OBN III's return to the stage July 25 at Beerland.

Dozen Street to the Eastside 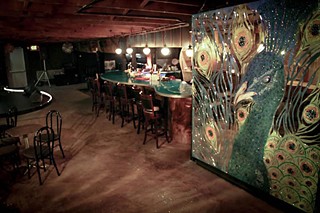 Finding a guitar pick that read "Dozen Street, 12th and Chicon" led me to discover a new neighborhood bar in an old familiar building at 1808 E. 12th. The dimly lit and craftily retro-styled lounge occupies a room that, until recently, was Club 1808.

A black club with irregular hours and a history of hosting punk bands and noise artists, Club 1808 gained a wider reputation when it was widely reported that SXSW hit-and-run suspect Rashad Owens was scheduled to perform there the evening of the crash. That information seems as dubious today as it did then, but an APD rep confirmed that the business, owned by Gene Mays, remains under TABC investigation. 1808's Annex still has concerts scheduled.

If you remember Club 1808, you won't believe how cool Dozen Street looks by comparison. Their music calendar's still materializing, but dropping a quarter in the jukebox and listening to Tom Waits as you play free pool comes highly recommended.

Eagles songwriter Don Henley ripped Okkervil River in Sydney's Daily Telegraph last week, complaining about the local band altering his lyrics when they covered his 1989 solo hit "The End of the Innocence."

"You can't rewrite the lyrics to somebody else's songs and record it and put it on the Internet," Henley charged. "I'm sorry, but it wasn't an improvement. We were not impressed." He likened the ordeal to painting a mustache on someone else's painting.

This news reminded one Chronicle employee of the time Henley came into our office in the early Nineties and asked to use our john because he was having a bad hair day. Recounts the staffer: "He went into the stinky men's room and came out later looking about the same."

In response to Henley's comments, Okkervil frontman Will Sheff wrote an essay in Rolling Stone comparing his rewrite to the song evolutions witnessed in folk music and condemning copyright law for "[t]aking away something rich and beautiful that belonged to everyone in order to put more money into the hands of a small, lawyered few." 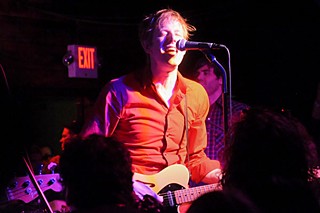 › "When the bass drops, everybody rush the stage!" That's what I imagine someone yelled just before hundreds of EDM fans broke through security on Friday at the Circuit of the Americas Amphitheater to get into the pit area for LA producer Dillon Francis' X Games set. The fire marshal briefly stopped the performance. Ultimately, Francis raved on.

› After a four-year commercial break, Spoon's set to return with They Want My Soul, Aug. 5 on Loma Vista. The band gave us a first taste this week with the brilliantly produced rocker "Rent I Pay." The forthcoming disc also includes a cover of Ann-Margret's "I Just Don't Understand."